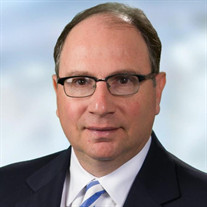 Longtime Philadelphia lawyer, an enthusiastic supporter of educational institutions and the arts, dies at 61 after a valiant battle with cancer. Alan R. Gedrich, a leading attorney at Philadelphia-based law firm Stradley Ronon Stevens & Young, LLP, passed away at his home on Saturday evening, October 30, after a hard-fought battle with cancer. Alan began his career at Stradley in June 1987 in the firm’s business department and was elevated to partner in January 1997. After transferring into the firm’s nationally ranked investment management group several years later, he quickly built a strong reputation in the local and national funds legal industry for his knowledge of both registered and unregistered funds. For many years, he represented mutual fund complexes, their independent trustees, registered investment advisers, and private funds. He negotiated lines of credit for some of the country’s largest mutual fund complexes. “Alan was not only a terrific lawyer but also a wonderful person with a great sense of humor,” said Bruce Leto, co-chair of the firm’s investment management group. “He was held in high regard by his clients, colleagues and friends at the firm; and we will all miss him dearly. Our thoughts and prayers are with his wife Pat and sons Austin and Ross.” In addition to practicing law, Alan was committed to giving back to his community and undergraduate alma mater, Penn State. Since 2007, Alan served on the board of trustees of AIM Academy, a private college preparatory school for children with learning differences. “Alan was always there to listen and share his thoughts when the Board made important decisions,” said Matt Naylor, chair of AIM Academy Board of Trustees. Pat Roberts and Nancy Blair, Co-Founders of AIM, added, “Thoughtful, caring, and the consummate gentleman are words that come to mind when we remember Alan. We will miss his sage advice and friendship.” He had also been appointed to serve on the Board of Advisors of Penn State Law, the university’s law school campus at University Park. Alan served in leadership roles for the Penn State Alumni Association and as a board member and president of the Smeal College of Business Alumni Society. “Alan loved Penn State and was as devoted an alumnus as I have ever seen,” said Roger Williams, the retired executive director of the Penn State Alumni Association. “He served faithfully for many years on our Alumni Council and Executive Board, and was honored with the Outstanding Council Member of the Year Award in 2013. His legal acumen was called upon time and again to help us navigate many issues and challenges, and he was profoundly influential on our success.” Additionally, he served as a member of the board of directors of the Walnut Street Theatre, America’s oldest theatre, which was founded in Philadelphia in 1808. He also served as a member of the Investment Committee of several not-for-profit educational institutions. Among his achievements, Alan was recognized by Chambers USA: America’s Leading Lawyers for Business for his work with hedge funds. In addition to practicing law and giving back to education and arts organizations, Alan was a loving husband and father. There was nothing Alan was more passionate about than being with his family. He relished time with his wife, especially on the tennis court, where Alan was known to be quite the competitor. Born and raised in Philadelphia, Alan earned his J.D. from the University of Pittsburgh Law School and received his B.S. from the Pennsylvania State University. He also participated in the International Business Program offered by the University of Cologne in Germany. Before attending law school, Alan was employed by Coopers & Lybrand, CPAs (now PricewaterhouseCoopers, LLP) and earned his Certified Public Account (CPA) designation in Pennsylvania. Alan is survived by his wife Pat, his sons Austin and Ross, his mother, Sylvia and his sister, Amy. A celebration of Alan’s life will be held from noon to 4 p.m. on Sunday, December 19 at the Philadelphia Cricket Club, 415 W. Willow Grove Avenue, Philadelphia, PA 19118. The family wishes that memorial contributions be directed to either AIM Academy at www.aimpa.org/donate/alangedrich or to the Gedrich Family Endowment for CAPS and Collegiate Recovery (XXTGW) at Penn State. Checks made payable to Penn State can be mailed to Donor Member Services, 2583 Gateway Drive, Suite 130, Bristol Place One, State College, PA 16801. Memorial gifts can also be made online at www.raise.psu.edu/GedrichFamilyEndowment.

The family of Alan R. Gedrich created this Life Tributes page to make it easy to share your memories.

Send flowers to the Gedrich family.