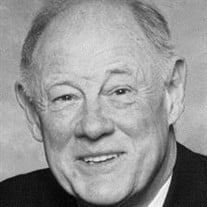 Alan Lawley, beloved husband, father, and grandfather, devoted friend, and admired professor, passed away peacefully at the age of eighty-four on October 17 surrounded by his family. Dr. Lawley, Professor Emeritus and formerly the A.W. Grosvenor Professor of Metallurgy in the Department of Materials Science and Engineering at Drexel University, was a long time resident of Wynnewood and more recently, Haverford, PA. Born in Birmingham, England in 1933, he experienced the sirens and food rationing of WWII as a young child before going on to attend the King Edward VI Aston School. While at King Edward, Alan balanced studies with a devotion to rugby and the game of cricket, playing for the All-Birmingham Team, honing his skills as a fast bowler. He then went on to receive First-class Honors while earning his B.Sc. as well as his Ph.D. in Metallurgy at the University of Birmingham. After receiving his doctorate, Dr. Lawley was invited to continue his education as a postdoctoral fellow at the University of Pennsylvania. It was during this time that he met his beloved wife of 57 years, Nancy Kressler and his original plan to return to England quickly changed. Alan lived a full life. Always a twinkle in his eye, energy in his step, and a quick sense of humor, he was happiest when surrounded by his family. An extension of that family included fellow faculty, staff and students at Drexel University. His passion for British sports, particularly his beloved football team, Aston Villa, never waned over the years, and scores for his favorite cricket teams and the Premier League were followed as closely as his adopted Philadelphia teams of the Phillies, Flyers and Eagles. Alan became a proud US citizen in 1976, aptly choosing the Bicentennial year. He enjoyed singing, leading the annual Christmas Eve Carol Sing at Hathaway Circle in Wynnewood for more than 20 years. A lifelong Gilbert and Sullivan fan, Alan knew every word to his many favorite songs. Alan was a member of Merion Golf Club and Merion Cricket Club where he served on numerous leadership committees. He played squash, tennis and cricket, serving as captain of the cricket team for several years, leading the team on many match tours to England and Bermuda. He also supported SquashSmarts, an inner city mentoring program, and was instrumental in its initiation at Drexel University. Alan cherished the time he spent with his nine grandchildren, often on call for mathematical tutoring at any hour of the day. His grandchildren loved when he came to cheer them on at their school and collegiate sporting events. An avid traveler, Alan most looked forward to taking his family on an annual summer vacation to the Outer Banks of North Carolina where wonderful memories were created over the course of twenty-two years. After completing his post doctorate at the University of Pennsylvania in 1960, Dr. Lawley went on to conduct research at the Franklin Institute before joining the faculty of Drexel University in 1966. He initiated the Powder Metallurgy program in 1968, and went on to chair the Department of Materials Engineering for many years. Dr. Lawley also served as President of the American Institute of Mining, Metallurgical and Petroleum Engineers (AIME). His passion in the field of materials engineering led to many distinguished honors and awards including membership in the National Academy of Engineering, the Kempton H. Roll Powder Metallurgy Lifetime Achievement Award, Fellow of American Powder Metallurgy Institute, Lindback Distinguished Teaching Award, and Fellow of the American Society for Metals. Dr. Lawley served as Editor-in-Chief of the International Journal of Powder Metallurgy for thirty years and was a well-regarded expert consultant to both government and industry. He lectured and published extensively in his area of expertise, and also served as a member of Met-Pro Corporation’s board of directors from 1990 to 2009. Alan is survived by his wife of 57 years, Nancy Kressler Lawley, his three daughters, Carolyn Losty (James), Elizabeth Samios (Gregory) and Jennifer Herrmann (David) and nine devoted grandchildren, Alexandra, Margaux, Jay, Christie, Gillian, Nicole, Rob, John and Alex as well as his sister, Margaret, who resides in England. A celebration of his life will be held on Saturday, November 25th at 1:00 pm at The Bryn Mawr Presbyterian Church, 625 Montgomery Avenue, Bryn Mawr, PA. Internment will be private. In lieu of flowers, donations may be made in memory of Dr. Alan Lawley to fund macular degeneration research at the following address: Macula Vision Research Foundation One Tower Bridge 100 Front Street, Suite 300 West Conshohocken, PA 19428-2894 866.462.2852 Or online at www.mvrf.org

The family of Dr. Alan Lawley created this Life Tributes page to make it easy to share your memories.