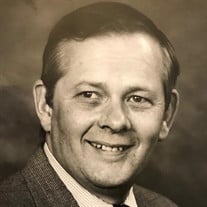 Alfred Perkins Lohmann II, passed away peacefully on March 3, 2021 at age 87 after fighting a long battle with leukemia. Fred was born on June 23, 1933, at the Bryn Mawr Hospital in Pennsylvania to Gertrude and Charles Lohmann. He joined the Marine Corps two years after graduating from Lower Merion High school. After serving our county faithfully, he went on to complete his degree at Charles Morris Price School of Advertising in Philadelphia. A brief stint working for Strawbridge and Clothier gave him a window into the world of advertising in the 50s. He gained experience in the advertising world without the use of computers. Live models posing in hats, gloves, and all the latest fashions of the time were hand-sketched by the trained artists and used in the circulars. This experience made a lasting impression on Fred. The depression of 1958 brought that job quickly to an end and he found himself working for Acme Supermarket’s marketing department. He spent the next 23 years working for Acme. With his hardworking and friendly personality, he rose quickly to head of the advertising and marketing department and soon began overseeing multiple stores in the tri-state area. Fred was an entrepreneur who needed to be his own boss. So, in 1979, he went into business for himself. He spoke often about that being one of the best decisions he ever made. When Fred was 18 years old he went on a blind date and met a pretty little 15-year-old girl named Tamzen. Barley five feet tall with rosy cheeks and a mischievous glint in her eyes, he was smitten from the start. Tammy, on the other hand, was hardly impressed. She was appalled that he wore blue jeans and a dirty t-shirt on their first date. But as Tammy often says when I ask her how she knew Dad was the one, she would smile coyly and say, “Fred, well, he just wouldn’t go away.” They were inseparable ever since. 70 years together, 64 years married, I would say he never did go away.. until now. Fred and Tammy went on to have three boys who they loved dearly. The most special memories were the times the family went camping on the east coast. Tent camping turned into pop-up camper camping which turned into no camping at all but a beach house on the bay in Nags Head, North Carolina. In an ever-busy life, camping was a way Fred brought his family together. It was during these trips his boys saw how their dad demonstrated a sound work ethic. Every year was different and included a variety of friends and family who joined in on the trips. These vacations were a mixture of hard work and loads of laughter and fun. Christmas was Fred’s holiday. He would volunteer as the local Santa and bring joy to thousands of children each holiday season. He was the president of the Bryn Mawr Rotary club. He volunteered weekly at Saint Mary’s thrift shop. He also spent time volunteering for Saint Mary’s Altar Guild. After his retirement, he would donate his artistic and creative talents to serve his church by constructing and painting anything the church might need. A few of the items he designed and built were wooden pumpkins for Halloween, giant nutcrackers for Christmas, and a wooden food donation box to place in the church’s front yard. Fred was passionate about music and his eyes would light up every time he pulled his banjo out of its case. He was an incredible musician. As a young man he had the opportunity to play alongside Louis Armstrong, his hero. He enjoyed sailing and boats and every opportunity he had, he would go out on the water. He enjoyed fishing but seemed to get outsmarted by the fish every time he put his pole in the water. Crabs on the other hand took his bait. As he got older his artist skills came out in homemade humorous birthday cards for his eight grandchildren, taking art lessons with his brother Pete, and landscape paintings copied from the photographs he took in France. France was another one of his great loves. Even though he could barely say a word in French, he went there every spring for 21 years with his wife and explored all over the south of France. No surprise, he met a variety of friends and kept in touch over the years. Fred was a devoted and loving husband, father, grandfather, and friend. There are not many men left like Fred. A true man’s man. He was a gentleman through and through and left the legacy of working hard, loving faithfully, and making people laugh until tears streamed down their face. A few months before he passed away, I asked him a question. “If you could go back and give your younger self a piece of advice, what would you say?” At first, he was embarrassed because everyone was looking at him waiting for his response. He brushed it off and made it like he wasn’t going to answer the question. After a few minutes, when all the attention was off him, he leaned over and said quietly, “To answer your question, I would say to my younger self to fear less, and trust God more.” Fred is survived by his wife, Tammy, his three sons, Carl, Chris, and Alf, and his eight grandchildren. His funeral service will be private at Saint Mary’s Church in Wayne due to COVID restrictions. You may celebrate Fred's life, by joining the service virtually on Sat. March 20th at 2 PM via https://www.stmaryswaynepa.org/liturgy-for-the-faithfully-departed Memorial donations can be made to Saint Mary’s Church or Purple Heart Veterans

Alfred Perkins Lohmann II, passed away peacefully on March 3, 2021 at age 87 after fighting a long battle with leukemia. Fred was born on June 23, 1933, at the Bryn Mawr Hospital in Pennsylvania to Gertrude and Charles Lohmann. He joined the... View Obituary & Service Information

The family of Alfred P. Lohmann created this Life Tributes page to make it easy to share your memories.

Send flowers to the Lohmann family.