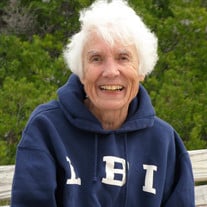 Ann H. Buchanan, Founder of Coach House Preschool November 30, 2017. Marjorie Ann Hopkins Buchanan, founder of the Main Line’s first privately licensed preschool, The Coach House, died today of natural causes. She was 96. Born in 1921 to Marjorie and Herbert Hopkins, Ann grew up in Spring Lake, NJ and Detroit, MI with her brother, John and beloved sister, Kate (Von Berg). Following graduation from Denison University in 1942, she joined American Airlines in Detroit where, as a result of a shortage of men serving in WWII, she was among the first women to be able to work in Airline Operations rather than serving in an administrative role. She thrived. It was at the airlines that she met Robert K. Buchanan of Boston, a former pilot for the Canadian Air Force. It was love at first sight. They married six months later and subsequently returned East where her father resided. She and Bob started a family in Gladwyne, with four cherished children to come. Their passion for each other was joyful and palpable, evident to everyone who knew them. It never ceased. Having moved to Troy, Ohio for Bob’s job with Hobart Brothers, it was there that Bob died of a heart attack at age 45, leaving Ann with four children, ages 12-19. To work through her grief, Ann co-started the State of Ohio’s first HeadStart program while ushering her children through college. When her last child departed for university, she was able to return to her beloved Philadelphia. Determined to continue her passion for early childhood education, she founded The Coach House Pre-School in 1974 in Radnor, with Director Mary Ellen (Campbell) McGinnity. So named for the stone building that housed horse-drawn carriages in earlier times, The Coach House repurposed existing horse stalls for classrooms and used the extensive grounds as an environment for the children to play and learn about nature. Despite prevailing societal attitudes, which feared pre-schools were an indicator of societal breakdown, The Coach House was renowned for its breakthrough education and compassionate care for children of working parents. In the course of its 10 years, more than 1,000 children (in their 40s today) were cared for at The Coach House. Ann’s most vivid character traits were her ebullient optimism and attentive listening. “Life is such an adventure!” she said often. She believed everything in life was beautiful. Her life-long love of the Jersey Shore began as a child while living in Spring Lake; throughout her life, she would spend summers on Long Beach Island, infusing her children and grandchildren with the same love of the ocean. A classical pianist, avid tennis player, and global traveler, her favorite destinations were Switzerland and Turkey. While classical music was her passion, she was a big fan of the Beatles, Rolling Stones, and Grateful Dead. Above all else, it was as a member of Bryn Mawr Presbyterian Church that lay deepest and most fully in her heart. Ann is survived by her four children and six grandchildren: John and Carolyn Buchanan of Brooklyn, Marjorie Buchanan and Aram Terzian of Lewes, Douglas and Barbara Buchanan of Rehoboth Beach, and Susan Buchanan of Wilmington. Grandchildren include Garrett B. Hauenstein of Los Angeles, Robert Owen Buchanan of Brooklyn, Juliet Terzian of Brooklyn, Taryn J. James of Portland, OR, Karin R. Jensen of Denver, and James C. Stone of Phoenix. 10 grandchildren also survive her. A memorial service will take place at Bryn Mawr Presbyterian Church on December 9, 2017 at 10 AM. A private internment precedes the service. In lieu of flowers, contributions may be made to BMPC Music and Fine Arts program or the Children's Fund.

The family of Ann H. Buchanan created this Life Tributes page to make it easy to share your memories.

Send flowers to the Buchanan family.