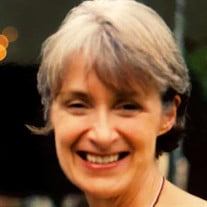 Ann Jones Wilkerson died on September 9, 2020 at her home, comfortable in death despite a long chronic illness and profoundly grateful for all the blessings in her life: her family, her friends, her church, music, and butterflies. In the hamlet of LeRoy, Illinois Ann was born as the older of two daughters born to Frank and Janet Jones. Early on her love of music was evident. She studied piano from an early age through high school but, not to real regret, was persuaded to study something practical in college at the University of Illinois and later in graduate school at the University of Wisconsin. She chose early child development which led to teaching in the original Head Start in Chicago, later in the Lab School of the University of Chicago. Then in a succession of other similar schools of which her longest tenure was a pre-school and kindergarten teacher at St. Peter’s School, Philadelphia. Her years as a teacher of young children opened the unexpected facet of lifelong friendships with parents of her students and, in time, with her former students with whom she took enormous pleasure as she watched them grow up to become adults and parents themselves. Ann had the unusual experience of a lifelong correspondence with parents of a once preschool student and then the satisfaction of seeing her daughter Sarah be teacher to the child of this former student in another city. Those who became Ann’s friends were so for life and her circle constantly expanded through school, neighborhood, church, and shared interests, especially knitting. Another set of friends was less conventional, butterflies. Farmers and flower growers who came to local markets knew of Ann’s love of Monarch Butterflies and, in late August, always brought milkweed branches with eggs attached. Under her watchful, expectant eye every summer she witnessed the metamorphosis from egg to caterpillar to chrysalis to butterfly who then left her care for the yearly southward journey. Her husband knew first hand that she was a butterfly whisperer as he witnessed her conversation with a Red Admiral who listened to her direction and returned at the appointed time to rendezvous. Ann is pre-deceased by her parents and sister Sara Nelson. She is survived by her two children Sarah Davies Kim and Daniel Davies; by her four grandchildren, Ella, Cyrus, Parker, and Piper; by her two step-sons Jonathan and David; by her four step-grandchildren, Billy, Sonya, Tobias, and Annaliese; by her nephews Matthew and Clark; and by her husband of thirty-four years, Doug. Burial services and interment were held at Christ Church Philadelphia. A memorial celebration of life will be held next year. In lieu of flowers, Ann’s family suggests a contributions to Settlement Music School https://www.settlementmusic.org/give-now/ or to the Christ Church Preservation Fund https://www.christchurchphila.org/giving-to-Christ-Church-preservation-trust/ or, as an alternative, befriend a butterfly.

Ann Jones Wilkerson died on September 9, 2020 at her home, comfortable in death despite a long chronic illness and profoundly grateful for all the blessings in her life: her family, her friends, her church, music, and butterflies. In the... View Obituary & Service Information

The family of Ann Jones Wilkerson created this Life Tributes page to make it easy to share your memories.

Ann Jones Wilkerson died on September 9, 2020 at her home, comfortable...

Send flowers to the Wilkerson family.