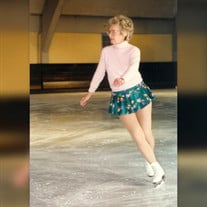 Not sure what to send?

ANNE GRAYDON CARRINGTON WOOD (April 9, 1924 - November 1, 2021) Anne was born in New York City and spent her early years in Scarsdale, New York. She was the second of three children of Helen and George Carrington. She was married in 1947 to Dr. Howard Page Wood who pre-deceased her in 2010. She is survived by the families of her sister Sally (Tom) and her brother George (Else) both of whom pre-deceased her. She leaves four children: Dr. Julia Foster (Lawrence) and their children David, Paul (Dili), Eric, and Laura (Gray); Howard Page, Jr. (Myra); George (Leigh divorced and Nina) and children Sarah, Cary, Tyler and Karly and step-children Chloe (Jimmy) and Isabel; and Wistar (Laura) and girls Chandler and Graydon. Anne graduated from Chatham Hall, Virginia and Vassar College. After World War II started, she enrolled in Columbia University to earn a degree in Occupational Therapy. This also gained her Masters’ degrees in Physical Education and Vocational Guidance. She started working in earnest at the Kingsbridge, New York Veterans’ Hospital. From there she followed Howard as he navigated his way through internships and residencies in Boston, Philadelphia, Denver, and ultimately in the Army Hospital at Fort Campbell, Kentucky. There she helped to build an OT department. The printing press weighed several tons, nothing to fool around with. After a few years, pregnancy and nausea put an end to her formal working years. Anne spent the next few years with baby time and their four children, eventually moving to Haverford and their beloved house on Buck Lane. Anne was an active volunteer sometimes as an OT, sometimes in hospice; 40 years were spent with the Vassar Show House, (a charitable enterprise which raised not only eyebrows but money for Vassar College Scholarships). She also spent 14 years with the local Planned Parenthood clinic. Her fun time was spent on the tennis courts, especially on grass, and traveling as one of the members of the ranked teams. Her most serious fun of all was spent at the Philadelphia Skating Club where she started from nothing to winning the dance competitions. Howard joined her in ice dancing. One of her saddest memories was little Wistar, just popped into bed, saying plaintively, “No go skating, Mommy”. Meanwhile they traveled; their first trip overseas was to England with George and Wistar. From then on Howard took time off from his office practice to promote his interest in orchids - meetings in Thailand, Singapore, Australia and New Zealand. Anne enjoyed the trips as enriching encounters with the natural world while Howard was studying, writing, meeting influential orchid people, all in preparation for his Book as the world authority on Dendrobium orchids. More trips included Madagascar, New Guinea, Antarctica, Fiji, South America, South Georgia Island and the Aleutian chain. He took photographs while Anne kept journals. They ran out of travel ideas and moved to Quadrangle. Howard continued his writing in the basement of their cottage where he turned out more papers and enjoyed sales of his Big Orchid Book. Anne’s arthritis advanced seriously - she could no longer get her skating boots on her fused ankles, and tennis gradually became out of the question. What was she to do? She took up drawing and watercolor - it was the beginning of a new life. They both saw Quadrangle as a haven, a place where they were well cared for, where there was time to continue their interests. Their friends were new, more friendships were sealed; Anne was especially thankful for her long and healthy life even though Howard could not accompany her on the last part of her journey. Quaker Service and Celebration of her Life at Haverford Friends’ Meeting will be held on Saturday April 9, 2022 at 2pm. Contributions may be made in her memory to Haverford Monthly Meeting, 855 Buck Lane, Haverford, Pa 19041

ANNE GRAYDON CARRINGTON WOOD (April 9, 1924 - November 1, 2021) Anne was born in New York City and spent her early years in Scarsdale, New York. She was the second of three children of Helen and George Carrington. She was married in 1947 to... View Obituary & Service Information

The family of Anne Graydon Carrington Wood created this Life Tributes page to make it easy to share your memories.

Send flowers to Anne's Quaker Service and Celebration of Life.