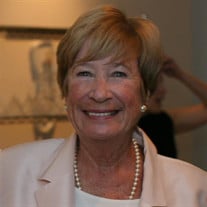 Annette Fogo Harper of Gladwyne, Pennsylvania, died unexpectedly January 4th, just two days after her eighty-fourth birthday. She was born Annette Elizabeth Fogo in 1936 in Halifax, Nova Scotia, daughter of the Hon. J. Gordon Fogo, K.C., and the former Helen Louise Fisher. Her father was a senator and president of Canada’s National Liberal Federation. She grew up on the water in Bedford, Nova Scotia and in the capital. During the World War II years her Ottawa neighbors included the exiled Dutch royal family, and she and little Trixie (later Queen Beatrix of the Netherlands) exchanged playdates and birthday party invitations. Several years later Annette went off to boarding school, first attending Bishop Strachan School (Toronto) and then graduating from Kingswood (now Kingswood Cranbrook School, Bloomfield Hills, Michigan). From Kingswood, she went on to Cornell University where she studied literature under (among others) Vladimir Nabokov. She graduated with the Class of 1958. After a post-graduation European “Grand Tour,” her love of books took her to New York City, where she worked in a junior position in the editorial department at Doubleday. Reading, especially literature and biographies, was a passion of hers even after she left the publishing industry; she always had a book at her elbow, and in fact was riding back from the library with three new selections in her bag when she died. In October 1960 at Trinity Church in New York, Annette married James Robbins Harper, a Philadelphian who had been a classmate at Cornell University. The adventurous newlyweds packed up and moved to New Orleans for three years to, in her words, “experience the pleasures of living in this legendary town.” There, she worked for an ad agency that represented, among other accounts, the Tabasco hot sauce company. These jambalaya-fueled “salad days” provided a lifetime of colorful stories and instilled in both bride and groom an abiding love of Cajun cuisine. In 1963, expecting their first child, the Harpers moved to the Philadelphia area, living initially in Devon and then on Golf Club Road in Newtown Square. There, Annette and Jim raised three children in a house frequented by a large and intergenerational circle of friends. Parties often ended with guests gathered around the piano, singing. They stayed in that house for fifty years, moving to Waverly Heights in Gladwyne in 2016. Enthusiastic tennis and paddle tennis players, the Harpers were members of The Courts and of Waynesborough Country Club, where Annette was active in interclub team competition. In the summers they would head to Camp Tamarack, the Harper family’s rustic retreat at Pocono Lake Preserve. Annette was fiercely loyal to the people she loved and to the causes she supported. She served Kingswood for decades as class secretary, compiling and editing the “class notes” in the school’s alumnae magazine. She was devoted to Cornell, serving on reunion committees for half a century and conducting alumni interviews for the admissions department. She was active in the Alumni Association of Kappa Alpha Theta, which named her “Theta of the Year” in the late 1980’s. She was a devoted parishioner of St. David’s Episcopal Church in Wayne, co-chairing the Church Fair in the 1970s and volunteering for the fair right up to the last months of her life. And during her last years at Waverly Heights she continued her pattern of active community participation, writing for the Waverly Window and serving on the Cinema Committee. Annette loved music and theater, always retaining something of her early training in classical piano and occasionally reminiscing about her “star turn” as Yum-Yum in Camp Wapomeo’s production of The Mikado. Her love of Gilbert and Sullivan manifested itself anew every June when she and her husband would organize a group of friends to attend the Savoy Company’s annual production at Longwood Gardens. The Harpers were also, for over forty years, associate members of the Orpheus Club of Philadelphia, seldom missing a concert. With her keen memory, Annette was a repository of old lyrics, which she wove into daily life; she had a song for everything. She also loved travel, especially to warmer climes, and always spent the month of March on the beach at Siesta Key, Florida. With international destinations, her tendency was not to check off items on a “bucket list,” but instead to move slowly and savoringly, focusing on a single region with each trip. Her last foreign trip, to Colombia in 2017 to visit her son and his family, was indicative of her adventurous spirit. As age made travel less comfortable, the Harpers scaled back, but Annette always maintained the memories and the worldliness that came with travel. Friends and family will remember Annette’s sharp wit, her sparkling, vibrant sense of fun, her curiosity about the world, the aplomb and determination with which she approached challenging situations, her candor in expressing opinions, her kindness towards the powerless, and her unique combination of graciousness and no-nonsense toughness. Annette Harper is survived by her husband of 59 years, James Robbins Harper of Gladwyne PA, by her daughter Hadley Harper Witcher (Robert L.) of Wayne PA, her sons James Gordon Harper (Roxi Thoren) of Eugene OR, and Alexander Wetherill Harper (Fanny Mora) of Bogotà, Colombia, and by her grandchildren Sebastian and Bartholomew Harper, Eleanor and James E. B. Harper, and J. Avery and Cora Witcher. She was predeceased by another granddaughter, Juliet Harper, who died in 2008. Her Memorial Service will be held at St. David’s Episcopal Church, 763 South Valley Forge Road, Wayne PA, on Friday January 17th at 2:00 pm. Interment will be private. In lieu of flowers, contributions may be made in her memory to The Fresh Air Fund, 633 3rd Ave, New York, NY 10017.

The family of Annette F. Harper created this Life Tributes page to make it easy to share your memories.

Send flowers to the Harper family.