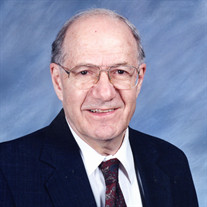 In Memoriam ARTHUR D. HUGHES Arthur Dadmun Hughes (89) beloved husband of the late Natalie Anne Newby Hughes went to be with the Lord on the 29th of January 2018 at Chester, PA. They had been married 61 years. Born July 21, 1928 in Richmond, VA, he was a son of the late George Stevens Hughes and Julia Margaret Dadmun Hughes. He is survived by his loving daughters Donna Hughes-Saurina, VMD, and her husband Daniel Saurina of Langhorne, PA and Carol Stevens Lane and her husband D. Kent Lane, Jr. of New Castle, DE and grandchildren, Anastasia and Nikolai Lane and his devoted sister, Margaret Hughes Fisher of Raleigh, NC. Mr. Hughes grew up in Richmond, VA, the fourth in a family of five children. He graduated from Thomas Jefferson High School where he also sang in the chorus and lettered in track. He received a Bachelor of Science degree in electrical engineering from the University of Virginia, School of Engineering in 1949. There, he was selected for the engineering fraternity, Tau Beta Pi. After graduation he joined IBM as a Customer Engineer in Washington, D.C. He joined the U.S. Army, during the Korean War, where during basic training he earned a Marksmanship medal. He was assigned to the Machine Records Unit (MRU) stationed at Ft. George G. Meade, MD for about 2 years. During that time he spent time in Texas with the MRU team from Fort Meade to demonstrate that IBM accounting machines (his maintenance responsibility) could be used in field operations under simulated battle conditions. In 1952 he entered Massachusetts Institute of Technology with a working scholarship in the MIT Digital Computer Laboratory, Cambridge, MA and the MIT Lincoln Laboratory in Lexington, MA. He designed and installed input-output capabilities to the Memory Test Computer, an early vacuum-tube machine and programmed the World-Wind 1, another early computer. He completed his thesis, “The Incorporation of a Magnetic-Matrix Switch into a Multiplanar Coincident-Current Magnetic-Core Memory and earned a Master’s Degree in electrical engineering. In 1955, Arthur married Natalie Anne Newby, the love of his life at St. Paul’s Episcopal Church in Newton, MA, her home town. They sang together for a number of years in the MIT Choral Society. His work at MIT included responsibility for the Semi-Automatic Ground-Environment (SAGE) system, a command and control complex to protect North America from bombers flying over the North Pole. After leaving MIT, he designed a computer to test the guidance of an Intercontinental Ballistic Missile at the National C. in Medford, MA. He came to Auerbach Corp. in Philadelphia as a computer system consultant and Program Manager in 1960. There with others he worked to produce a nine-computer command and control system for the U.S. Navy called the CINCPAC OPCONCENTER Data Processing System, later installed in Hawaii. As an authority on computer-display, command and control systems, he left Auerbach to help form a consulting company called Alltech Computer Systems, Inc. in Pennsauken, NJ. Mr. Hughes then established his own consulting firm, Hughes Associates, Inc. in Gladwyne, PA. He developed a work station for computer presentation and image displays. He also directed the completion of a clinical laboratory product based on pattern recognition for Geometric Data Corp. a subsidiary of Smith Kline Corp. in King of Prussia, PA. In 1982, he joined Technitrol Inc. as Product Manager for the Financial Products Division in Philadelphia, PA. There he led the development of currency counters, cash dispensers and other products until retiring in 1995. Named in three patents, he was primary on the patent, “Method of detecting the improper separation of documents being fed through a document counter or the like.” Arthur and Natalie Hughes lived in Gladwyne, PA where they raised their children from 1962 until Natalie’s death on February 13, 2017. After singing in the choir and serving on the vestry many years as members of Gladwyne’s St. Christopher’s Church, they joined Church of the Savior in Wayne, PA in 1978. His love for the Lord and for teaching grew there where he taught the adult class, “Walk Through the Bible” for about 35 years. His other passion was music and he sang with the University Glee Club of Philadelphia (for about 40 years.) He also enjoyed scenic photography and won many ribbons at the annual Gladwyne Library Arts and Crafts Show. He moved to Lima Estates in April, 2017 after losing his beloved wife, Natalie. Although missing her every day, he quickly endeared himself to everyone there through his gentle compassion for others. He loved time with friends, visits from the grandchildren, Bible Study, doing puzzles and Wii bowling. His Memorial Service at Lima Estates will be held on Sat. March 24th. at 11 am. In lieu of flowers, gifts may be sent to the following:Lima Estates Samaritan Fund, 411 N. Middletown Rd., Media, PA 19063; MIT EECS Dept. Memorial Gifts office, 600 Memorial Drive, W98-500, Cambridge, MA 02139 or University of Virginia, Engineering Foundation, 351 McCormick Rd. Charlottesville, VA 22904 ‘Well done, good and faithful servant....... Enter into the joy of your master' Matthew 25:23

In Memoriam ARTHUR D. HUGHES Arthur Dadmun Hughes (89) beloved husband of the late Natalie Anne Newby Hughes went to be with the Lord on the 29th of January 2018 at Chester, PA. They had been married 61 years. Born July 21, 1928 in Richmond,... View Obituary & Service Information

The family of Arthur D. Hughes created this Life Tributes page to make it easy to share your memories.

Send flowers to the Hughes family.