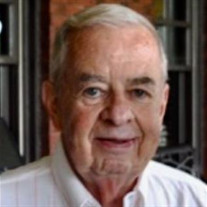 Barry Richard Walker, MD, 83, of Bryn Mawr, PA died on September 27, 2019. Born in Reading, PA, he was the son of the late Warren and Thelma Walker. Dr. Walker attended Yale University where he was elected to Phi Beta Kappa and from which he graduated with High Orations in 1958. He received his medical degree from the Columbia University College of Physicians and Surgeons. After completing an internal medicine internship and a residency at Temple University Hospital and a fellowship in renal-electrolyte diseases at the University of PA, he served two years as an officer in the U. S. Public Health Service hospital in New Orleans. There he was Chief Medical Officer of the emergency room. Returning to Philadelphia in 1968, Dr. Walker embarked on a distinguished career in the pharmaceutical industry. After serving as Director of Clinical Pharmacology at Smith Kline & French he joined Wyeth Pharmaceuticals. There he held several senior positions including Senior Vice President for Worldwide Clinical Research and Development. In this role he was responsible for establishing and supervising research and development, biostatistics, data and financial management throughout the U.S., Canada, South America, Japan and Europe. He was also active in academic medicine and research circles and served as Adjunct Associate Professor of Medicine at the University of PA School of Medicine and the Leonard Davis Institute of Health Economics of the Wharton School of Business. He authored more than 100 scientific papers. Following retirement, he consulted for a variety of pharmaceutical, bio-technology, medical-device and clinical-research companies as well as governmental entities. He spent his later years using his considerable biotech experience advising venture capital and start-up companies with their public offerings. He was a Diplomat of the American Board of Internal Medicine, a Fellow of the American College of Physicians and a Fellow of the College of Physicians in Philadelphia as well as a member of numerous other professional organizations. He was Co-Founder of the American Society of Hypertension where he served as Vice President and later, Chairman of the Board. His other memberships included The Yale Club of NY, the Church of the Redeemer, The Merion Cricket Club and the Confrerie des Chevaliers du Tastevin. He is survived by his wife of 59 years, Nancy Lee Weiherer Walker, his son, Stephen Todd Walker and daughter-in-law, Dorothy Schade Walker, his daughter, Elizabeth W. Keszeli and son-in-law, George M. Keszeli, and four grandchildren, Stephen, William, Andrew and Isabelle. Funeral services will be private. Memorial contributions may be made to the Alzheimer’s Assoc. Delaware Valley Chapter, 399 Market St #102, Philadelphia, PA 19106 or The Harriton House Assoc., P.O. Box 364, Bryn Mawr, PA 19010.

Barry Richard Walker, MD, 83, of Bryn Mawr, PA died on September 27, 2019. Born in Reading, PA, he was the son of the late Warren and Thelma Walker. Dr. Walker attended Yale University where he was elected to Phi Beta Kappa and from which... View Obituary & Service Information

The family of Barry Richard Walker, MD created this Life Tributes page to make it easy to share your memories.