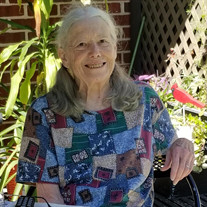 Beatrice Perrine Carpenter Durham Blackman, 83, Biochemist and Writer Beatrice Perrine Carpenter Durham Blackman, Born July 25, 1935 in Wilmington, Delaware to Edith Foote Carpenter and Allan Wallace Carpenter, died on October 1, 2018 in Bryn Mawr, PA. A graduate of Lower Merion High School, Bea was a member of the first two-year class at Harcum Junior College. She then graduated from Beaver College, now Arcadia University. Bea’s first professional position was as a Research Assistant to L. Joe Berry, Ph.D at Bryn Mawr College. She investigated altitude stress in mice through a grant from the US Air Force, preliminary to early space explorations. Bea always credited the impetus for her research career to the education that she received at Harcum Junior College, Bryn Mawr, PA. She was an active advocate for,and dedicated Trustee of the Harcum for many years. Bea took great pride in the educational endeavors of the students, and in the on-going development of the college. Bea continued her extensive bio-medical research career at Lankenau Hospital Division of Research and Hahnemann Medical College, working and co-authoring numerous scientific publications with Dr. Harvey I. Miller. At Presbyterian University of Pennsylvania Medical Center, Bea conducted research on coagulation studies with normal and diabetic subjects. Then, until retirement, Bea was a Senior Medical Writer in the Regulatory Medical Writing Department at Wyeth Pharmaceuticals. Bea also compiled, edited and published the writings of her mother, Edith Foote Carpenter. Those volumes are, There Was a Little Girl and Writings of My Years 1922-1972. In 2011, Bea moved to The Quadrangle in Haverford, PA, where she rekindled life long associations and made many new and dear friends. Bea was an avid participant in many of the committees and activities at the Quadrangle. She was known as the Voice of Recycling, and often advised her friends about the benefits of recycling, among many other things! The years at the Quadrangle were among her happiest. Bea married the late Richard S. Durham, son of Walter K. Durham and Emma Prizer Durham of Gladwyne, PA in 1956. She later married Charles A. Blackman. She leaves sisters, Joan C. McElhinney of Medford, NJ and Alison C. Lucas of Saratoga, CA. Children, Edith W. Durham of Williamstown, MA and Richard H. Durham of South Burlington, VT. Grandchildren, Kacie Ann Lagun, Margaret Hynes and Benjamin Hynes. Nieces and nephews, Albert Lucas, Linda Cooper, Benjamin Lucas, James McElhinney, Peter McElhinney, and Kate McElhinney Montgomery. A memorial service will be held at a later date, at the convenience of the family.

The family of Beatrice C. Blackman created this Life Tributes page to make it easy to share your memories.

Send flowers to the Blackman family.