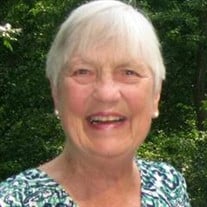 Betsy Borst Stanton, age 85, died in her home in Bryn Mawr, PA on July 12, 2018, surrounded by her family. She is survived by her beloved husband of 63 years, Vernon, and their four children: Jeffrey (Lisa), Kathryn, Janet Burt (Dave), and Roger (Kristin). Betsy had nine grandchildren: Aly and Jamie (Jeff), Justine, Bridget and Tess (Janet), and Gray, Lily, Penn and Katrina (Roger). She is also survived by her sister Barbara Rodgers (Theodore) of Seattle, WA, sister-in-law Barbara (Campbell) Borst of Berwyn, PA, as well as many nieces and nephews. Betsy was preceded in death by her parents, Frances (Trissal) and George Borst, and her brother, Robert. Betsy was born on May 13, 1933 in Philadelphia and graduated from Lower Merion High School in 1951. She earned a B.S. in Human Ecology from Cornell University in 1954, and after raising her children went back to earn an M.S. in Education from the University of Pennsylvania in 1981, with certification as a Reading Specialist. After college, Betsy worked at the Farm Journal in Philadelphia, writing and editing cooking articles and recipes. She married Vern in 1955, and in 1956 the couple moved to Coronado, CA, where Betsy worked for the San Diego Gas and Electric Company as host of one of the first live television cooking shows. She also appeared regularly on the radio as part of her work. In 1957, Betsy and Vern moved back to the Philadelphia area, and after their son Jeff’s birth in that same year, Betsy became a full-time stay-at-home mother. During that time, she was an energetic volunteer, with most of her activities focused on helping young children. She was a co-founder and chairman of the Child Day Care Center of the Main Line (1970-72), and devoted countless hours to the Day Care Association of Montgomery County, serving on the Board of Directors (1971-82), as Vice Chairman (1972-76) and as Chairman (1976-78). Once her children grew older, Betsy decided to re-enter the workforce. After earning her teaching certification, she became the Reading Specialist at Lansdowne Friends School in 1980, later moving to Shipley School, where she taught second grade and eventually became the Lower School’s Reading Specialist. She retired in 1992. Family was the driving force in Betsy’s life. She was a devoted wife, mother and grandmother who was known to (often) take an hours-long plane ride just to see a grandchild’s concert or performance in a play. She managed to put the finishing touches on a hand-knit Christmas stocking for her infant granddaughter Katrina in the last week of her life. Betsy was not only the family genealogist, she also remembered every birthday and anniversary of her large, extended family, and she always made sure a group picture was taken to commemorate each family gathering. An athlete who played varsity field hockey and basketball in high school, Betsy was an avid outdoorswoman. Her passions included hiking, camping and backpacking with her family and friends, as well as whitewater canoeing, tennis and biking. She and Vern led the “Port Clinton to Eckville Stroll,” a hike for their friends that became an annual tradition for more than 30 years. Betsy was expert in many forms of handwork, including knitting, needlepoint and sewing. Her family cherishes her many creations, including afghans, Christmas stockings, sweaters and ornaments. She was also a voracious reader who enjoyed sharing and discussing books with her friends and family. Betsy was an adventurous soul who traveled extensively throughout her life. She loved a wide variety of travel experiences, from the museums and cathedrals of Europe to cross-country road trips to canoe treks in the Canadian wilderness. She also treated every one of her grandchildren to an individual trip, where she zip-lined in Costa Rica, went on an African safari and sailed among the Greek islands, among other activities. A memorial service will be held on Saturday, August 11, 2018 at 11 a.m. at Beaumont Retirement Community, 601 N Ithan Ave, Bryn Mawr, PA 19010. In lieu of flowers please consider honoring Betsy’s commitment to children and literacy by donating to in her name to: Big Picture Philadelphia Attn: Chris Petersen 2300 West Master Street Philadelphia 19121 Bigpicturephiladelphia.org This organization, which was of special interest to Betsy, operates the Vaux Big Picture High School in West Philadelphia, helping at-risk youth attain a high school education.

Betsy Borst Stanton, age 85, died in her home in Bryn Mawr, PA on July 12, 2018, surrounded by her family. She is survived by her beloved husband of 63 years, Vernon, and their four children: Jeffrey (Lisa), Kathryn, Janet Burt (Dave), and Roger... View Obituary & Service Information

The family of Betsy B. Stanton created this Life Tributes page to make it easy to share your memories.

Send flowers to the Stanton family.