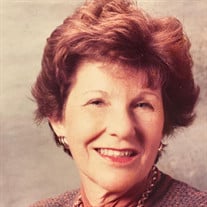 Bobette Rosenau Leidner, a journalist and public relations consultant, passed away at Beaumont in Bryn Mawr, PA. Mrs. Leidner was 98 years old. Mrs. Leidner’s life-long career in journalism began at Cornell University where she was an editor of the Cornell Daily Sun newspaper and continued after graduation as a reporter for The Philadelphia Inquirer during WWII. Mrs. Leidner interviewed many notable luminaries of the time, including Admiral William Halsey, Jr., Admiral Chester W. Nimitz, and First Lady Eleanor Roosevelt. In 1956, Mrs. Leidner started her public relations business, consulting for organizations such as the American Association of Museums; the Independence Park Association; and the World Affairs Council. She directed the first Arts Festival for Philadelphia. Mrs. Leidner was instrumental in the restoration of the Pennsylvania State Capitol Gardens in Harrisburg and the rehabilitation of the Swann Fountain at Logan Square, in Philadelphia. During the years of 1950- 1990, Mrs. Leidner served on a multitude of civic boards and cultural organizations including The Philadelphia Orchestra; co-founder and President of Young Musicians in Philadelphia; Trustee of The Pennsylvania Academy of the Fine Arts, President of their Women’s Board, and a docent for their fine arts collections. She was also a founding member of the Young Friends of the Philadelphia Museum of Art and a founding member of the Library Study, and a continuing member of the Library Committee. Mrs. Leidner was dedicated to her alma mater, Cornell University, where she was active on numerous boards. She was Vice Chairmen of the Cornell Council, served on the advisory board of the School of Arts & Sciences; was instrumental in the founding of the Performing Arts Center, and was a founding board member of the Herbert Johnson Museum of Art to which she was later bestowed Honorary Fellow. Aside from her devotion to the fine arts and music, Mrs. Leidner’s interest in horticulture led to decades of involvement in floral design. She was President of the Huntingdon Valley Garden Club and appointed to the Council of the Pennsylvania Horticultural Society where she served as a Public Relations Chair, as well as an exhibitor in the Philadelphia Flower Show for over 40 years, winning countless blue ribbons. Mrs. Leidner also became an accredited judge for the Garden Club of America and later in life was honored with Judge Emeritus. She was a past member of The Merion Cricket Club of Haverford, PA, and the Acorn Club of Philadelphia, PA. Her husband, Nelson J. Leidner, Esq., passed away in 1999. Mrs. Leidner is survived by her son Nelson J. Leidner, Jr., and her daughters Victoria Leidner, Cynthia Leidner Muller, and Bobette Leidner Fisk. Gifts in Memory of Mrs. Leidner may be directed to The Philadelphia Museum of Art and sent to: Library and Archives Philadelphia Museum of Art Development Department P.O. Box 7646 Philadelphia PA 19101-7646 https://www.philamuseum.org/?keyword=Donations

Bobette Rosenau Leidner, a journalist and public relations consultant, passed away at Beaumont in Bryn Mawr, PA. Mrs. Leidner was 98 years old. Mrs. Leidner&#8217;s life-long career in journalism began at Cornell University where she was an... View Obituary & Service Information

The family of Bobette Rosenau Leidner created this Life Tributes page to make it easy to share your memories.

Send flowers to the Leidner family.