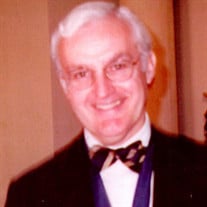 Bruce E. Northrup, M.D. of Dunwoody Village, Newtown Square, PA. died peacefully on July 13, 2019. Beloved husband of Fran C. Northrup, and devoted father of Nicole Elizabeth Beer (Jeffrey) and Michael Vincent Northrup (Samantha Evans); also survived by 4 grandchildren: Luke, Mia, Lincoln and Noah; sister- in- law, Cari Lyn Vinci and brother- in- law, John "Bud" Curva (Judy). His Memorial Service will be held on Thurs. July 18, at 11 AM, at The Church of the Redeemer, 230 Pennswood Rd., Bryn Mawr PA 19010. A reception will follow. In lieu of flowers, contributions may be made to the Northrup Family Medical Legacy Scholarship, The Ohio State University, Development & Alumni Affairs, P.O. Box 183112, Columbus, OH 43218-3112. Born in Zanesville, Ohio, Bruce Northrup was the son of the late Dr. and Mrs. Edgar Northrup, and the grandson of Dr. and Mrs. Clarence E. Northrup. He graduated from Marietta High School, Amherst College, and The Ohio State University Medical School. Upon graduation, he served two years in Viet Nam as an army doctor in a M.A.S.H. unit. Following his military service, in 1968 Bruce was selected as the only Neurosurgical Resident at Johns Hopkins University Hospital, eventually serving as Chief Resident. He met and married Fran Curva in 1970. In the years following his training, he practiced neurosurgery at Penn State’s Medical School in Hershey, Pa., the Neurological Institute in Fargo, North Dakota, the University of Pennsylvania, and Thomas Jefferson University Hospital, where he was a Professor of Neurosurgery. While at Jefferson, he co-authored several neurosurgical books, and published numerous scientific articles. During the Jefferson years, he also served as President of The Pennsylvania Neurosurgical Society, as well as President of the Cervical Spine Research Society. Dr. Northrup helped establish the European Branch of The Cervical Spine Research Society. Most notably, as part of his Cervical Spine teaching commitment in Italy, he operated on a patient and performed the entire surgical procedure while speaking fluent Italian! In 2001, Dr. Northrup was instrumental in the canonization of a new Catholic saint, St. Leone Aviat. Dr. Northrup testified to the Vatican tribunal, was invited to the canonization in Rome, and was honored with a private audience with Pope John Paul II. A true Renaissance man, Bruce lived his life to the fullest. He was brilliant and had a dry sense of humor;often referred to as “the absent-minded professor”. He had a multitude of interests: music (particularly opera), mountain climbing, canoeing, and windsurfing. He played piano with his daughter, Nicole, scuba diving, ski instructor, ski patrol, heli-skiing with his son Mike, karate-black belt, tai chi and wine connoisseur. Bruce ran three Marine Corps marathons and a triathlon, he enjoyed long-distance biking, including the MS City to Shore, dog- obedience training, cooking, languages, history, and astronomy. He was a lifelong Episcopalian who was active in the churches where he worshiped. Those who knew Bruce describe him as modest, gentle, caring, and kind. He was a mentor and role model to family, friends and to young doctors. Fran received a sympathy text that “Bruce’s ‘fierce’ love for his wife and family knew no limits and that the connection and commitment Bruce and Fran had to one another was unparalleled”. He was a member of The American Legion, The Masons, the Philadelphia Rotary Club, The Philadelphia Dog Training Club, The Suburban Dog Training Club. The 1827 Society of the Pennsylvania Horticultural Society, and The Men’s Garden Club of Philadelphia. Bruce was a lifelong learner. After retirement he completed the 3-year Barnes Foundation Horticultural course, and received a certificate of merit in horticulture science. Bruce was a “doctor’s doctor”, beloved by his patients, and loved and respected by the nursing staff. Jeffersonians frequently referred to him as “the last of the gentleman doctors”! After a life so well-lived, and a courageous nine-year struggle with Lewy-Body Dementia, we know God was waiting for his servant with open arms. Rest in peace, Bruce, we all love you.

The family of Bruce E. Northrup, M.D. created this Life Tributes page to make it easy to share your memories.

Send flowers to the Northrup, family.