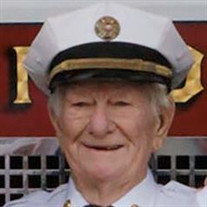 Carl Alfred Hornung, age 96, passed away Tuesday, February 20th, 2018 in Bala Cynwyd, Pennsylvania. He was the beloved husband of the late Jeanette (nee Schwartz) Hornung and loving father of Chick Hornung, Bill Hornung, Susan Davit (Paul), Linda Ferguson (Kip), Patti Reilly (Shaun), and Jim Hornung (Faithe). He is the loving grandfather of Jake (Beverly) Hornung, Janine (John) Kalathas, Laura Hornung, Doug Hornung, Cara Hornung, Cody Hornung, Timothy (Molly) Reilly, Lisa (Chase) Hudson, Amanda Reilly, Caroline (Benjamin) Brinkert, and Steve (Sarah) Davit. He leaves behind 2 great grandchildren – Nicholas and Lorelai Kalathas. Carl was the brother of the late Edward G. Hornung, Lincoln G. Hornung, Robert B. Hornung, William L. Hornung Jr., Frances H. Woolery and Aline H. Crossan. Beloved Carl Alfred Hornung, United States Coast Guard Veteran, Electrician’s Mate, 2nd Class, enlisted on 6 October 1942 serving honorably until 20 October 1945. Carl continued back at home to be an active member of the community. Brother Carl Hornung, 32nd degree mason, recently received his 70-year Masonic service pin from Lodge Cassia Mt. Horeb #273. Brother Hornung also served as Trustee until 2017 when he was bestowed the title of Trustee Emeritus. He was awarded the Carl Hornung Service Award in 2017, which will be awarded to those who serve in the Lodge and are active public servants in the community (including EMTs, Firefighters, etc.). He was a member of the Veterans of Foreign Wars, a lifelong member of Saint John’s Episcopal Church, and a proud member of the American Legion. He was also the recipient of the Citizen of the Year Award from the Bala Cynwyd Neighborhood Club in 2003. He joined the Union Fire Association at age 21 and served in several capacities until his death. He was the Chief Fire Officer from 1958 to 1988 and then served as Director on the Board of Directors from 1988 through 2018. His greatest enjoyment was working side-by-side with his fellow firefighters whom he called good friends. After serving in the Coast Guard during World War II, he came home to his loving wife of 53 years and took over his father’s family electrical contracting business which was started in 1911. Alongside his brothers, he continued the business and brought up his two sons and grandsons as electricians. But his greatest joy, alongside his wife, was having family dinners with all of his kids." The family will receive guests Fri. 6pm to 8pm in the Chadwick & McKinney Funeral Home, 30 E. Athens Ave. Ardmore PA, with a 6pm Masonic Service. His Funeral will be held on Sat. Feb. 24th., 11am in The Church of St. John, Lower Merion, 404 Levering Mill Rd., Bala Cynwyd, PA. Int. Westminster Cem. Contributions may be made in Carl's memory to either the above mentioned Church or Cassia Mt. Horeb Lodge #273 F&AM

The family of Carl A. Hornung created this Life Tributes page to make it easy to share your memories.

Send flowers to the Hornung family.