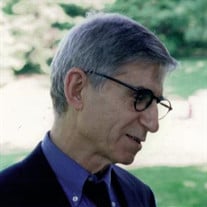 Carles Vallhonrat, architect, teacher, and founder of the original Louis I. Kahn Archive, died in his home in Haverford, PA, on February 21. He was 89. Mr. Vallhonrat, who taught in the School of Architecture at Princeton for 40 years, is especially remembered forthe grace of his careful insights and for a dedication to the integrity of design. Before joining the Princeton faculty, he taught in and was Chairman of the Department of Architecture at the University of Pennsylvania. He was William Henry Bishop Professor of Architecture at Yale University in 1985 and Paul H. Kea Distinguished Professor of Architecture at the University of Maryland in 1974-5. Over the years, he was a juror, lecturer, or panelist at Col.legid’Arquitectes de Catalunya, Columbia, Cooper Union, Harvard, MIT, Myongji University, Tel Aviv University, University of Texas, and University of Toronto. He wrote on tectonics and on Josef Hoffmann, and was principal narrator in the film Spent Light: Louis Kahn & the Salk Institute. The original Louis I. Kahn Archive (1974-78), of which Mr. Vallhonrat was founder and president, organized the successful effortto preserve the drawings and papers of Louis I. Kahn. From 1960 to 1971, Mr. Vallhonrat worked in the office of Louis I. Kahn as principal assistant to Mr. Kahn in the design of the Salk Institute, the Bangladesh Capital Complex, the Palazzo deiCongressi in Venice, and the first design of the British Art Center at Yale.As Senior Designer and Consultant to Ewing Cole Erdman & Eubank, he designed the Federal Reserve Bank of Philadelphia. Born in Barcelona, Mr. Vallhonrat was a graduate of the Universidad National del Litoral in Rosario, Argentina, and of the Master’s program in Architecture at the University of Pennsylvania. He is survived by his wife of 50 years Leslie Armitage Vallhonrat; his children: Christopher L. Vallhonrat, Gregory S. Vallhonrat, Heather V. Garrett, and Seth T. Vallhonrat; and his 5 grandchildren: Elizabeth G. Garrett, Alice C. Garrett, Carolyn J. Garrett, Charlotte M. Vallhonrat, and George B. Vallhonrat. A funeral service will be held Monday, March 6, at 2PM, at the Episcopal Church of the Redeemer, Bryn Mawr, PA. In lieu of flowers, gifts in memory of Professor CarlesVallhonrat can be made to the Princeton University Professor Vallhonrat Fund (Princeton University, Alumni and Donor Records, Helen Hardy, P.O. Box 5357, Princeton, NJ 08543-5357).

Carles Vallhonrat, architect, teacher, and founder of the original Louis I. Kahn Archive, died in his home in Haverford, PA, on February 21. He was 89. Mr. Vallhonrat, who taught in the School of Architecture at Princeton for 40 years, is especially... View Obituary & Service Information

The family of Carles Enric Vallhonrat created this Life Tributes page to make it easy to share your memories.

Carles Vallhonrat, architect, teacher, and founder of the original...

Send flowers to the Vallhonrat family.