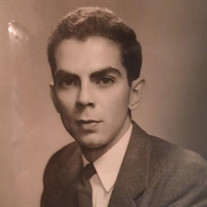 Carlos Joseph Alvaré died on January 20, 2017 in Haverford, PA. He was born in Havana, Cuba in 1924 and moved with his family to Philadelphia in 1933. He attended the Holy Child School and Saint Joseph’s Preparatory School and went on to earn a Bachelor’s degree in Architecture from Yale University in 1947. His senior thesis adviser was Oscar Niemeyer and his final project judged by master architect, Le Corbusier. From 1947-1951 Alvaré established himself as an architect working for Louis Kahn in Philadelphia, and in 1951 accepted a position at the firm of architect, Eugene Beaudouin, in Paris, France. In Europe, he designed airports and worked on projects under the auspices of the U.S. Army Air Corps under the Marshall Plan. Subsequent to his return to Philadelphia from Paris, he married, in 1953, Mary Juanita Heckel [deceased 2003] and later received a Masters of City Planning, 1954 from the University of Pennsylvania. From 1953-1957 he reported directly to Edmund Bacon at the Philadelphia Planning Commission. He co-founded, in 1957, the architectural firm, Harkins & Alvaré and was awarded “Best Design” by the American Institute of Architects (AIA) for the Bellarmine Classroom Building at St. Joseph's College, Philadelphia in 1961. From 1968-1983, he distinguished himself as Head of Design with Vitetta & Associates / Day & Zimmermann, Philadelphia, established the School of Architecture at Lehigh University where he was a tenured professor, and was awarded a Master of Architecture from Yale University based on his body of work. He served as a Directeur of the Societé de Bienfaisance de Philadelphie and was a member of the Athenaeum of Philadelphia. A devoted husband and father, Carlos Alvaré, enjoyed many years with his family at their farmhouse “Glenoak” in Valley Forge where, in addition to his professional endeavors, he honed his skills as painter and sculptor. He died at the Quadrangle, Haverford, PA on 20 January 2017 and is survived by his loving children: Gigi Alvaré of Corning, NY; Charles Alvaré of Los Angeles, CA; Philip Alvaré of San Miguel de Allende, Mexico; Jeannine Alvaré Goodwin of Merion, PA. and three grandchildren: Elias, Asher and Anaia Goodwin. Relatives and Friends are invited to attend his Funeral Mass on Friday January 27th at 10:30 AM at Our Mother of Good Counsel Church, 31 Pennswood Rd, Bryn Mawr, PA 19010, where you may call after 10 AM. Int. Calvary Cemetery. In lieu of flowers, contributions may be made in his memory to Penn Wissahickon Hospice 150 Monument Rd # 300, Bala Cynwyd, PA 19004

Carlos Joseph Alvaré died on January 20, 2017 in Haverford, PA. He was born in Havana, Cuba in 1924 and moved with his family to Philadelphia in 1933. He attended the Holy Child School and Saint Joseph&#8217;s Preparatory School and went on... View Obituary & Service Information

The family of Carlos Joseph Alvare' created this Life Tributes page to make it easy to share your memories.

Send flowers to the Alvare' family.