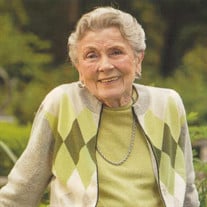 Carole Adele Solomon, formerly of Rosemont, died peacefully in hospice on Sunday, October 15, 2017 at the age of 91. Beloved mother of Cassie Solomon and step-daughter Joan Randall, and son-in-law Benjamin Pierce, she is also survived by her grandchildren Claire (23) and Katherine (Katie) Gillis (21). Her grand-daughters most of all will miss her glamour, her inspiring spirit and her unflagging support. Carole (nee Adele Wojciechowski) was born in Buffalo, New York but early in her life moved to Hollywood, California where the family name was changed to Horner. She was groomed as a dancer and her younger sister, Jacqueline, was groomed as a concert pianist. Her sister eventually was under contract at MGM along with a young Elizabeth Taylor. At 17, Carole ran away from home to dance with the George White Follies, and travelled all over the country, taking the stage name Carole Hayden. Carole later returned to LA to work as a camera girl at famous Hollywood clubs like Ciro’s and La Trocadero where she met and ultimately married Joe Solomon. Carole graduated from the Fashion Institute of Technology in New York City as a young married woman and worked as a fashion designer for Cinderella Dresses in Philadelphia. She was one of the early residents of Levittown, PA before the family moved back to Los Angeles. She spent many years in Beverly Hills, where she loved to paint. Her paintings have been exhibited at Rosemont Presbyterian Village where she happily spent her last 15 years. Carole also loved to travel and has been all over the globe. She lived in Mexico and in Japan but one of her favorite trips was India and Nepal where she rode an elephant through the jungle. We will miss her open spirit and her love of adventure. A Memorial Service will be held at Rosemont Presbyterian Village on Wed, November 22 at 10:30 am. At Carole’s request her ashes will be scattered on the Amalfi Coast.

Carole Adele Solomon, formerly of Rosemont, died peacefully in hospice on Sunday, October 15, 2017 at the age of 91. Beloved mother of Cassie Solomon and step-daughter Joan Randall, and son-in-law Benjamin Pierce, she is also survived by... View Obituary & Service Information

The family of Carole A. Solomon created this Life Tributes page to make it easy to share your memories.

Send flowers to the Solomon family.