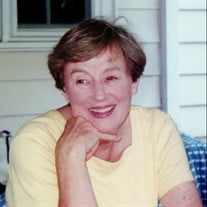 Carolyn MacReynolds Raymond of Newtown Square Pennsylvania passed away on July 1, 2017 surrounded by her family. She is survived by her four children: Ruth, Doug (Lisa), David (Renee), and Elizabeth (Joe), her sister, Lynda, and brother, Randy, seven grandchildren, and her beloved cat, Phebe. She was 86. Carolyn’s husband, Dr. F. Douglas Raymond, died in 2014, a loss from which she never really recovered. Carolyn graduated from Springfield High School and the Presbyterian School of Nursing. She finished her education at Rosemont College, graduating magna cum laude in 1979. She worked as a nurse at the Presbyterian Hospital and volunteered at the Young Great Society’s Free Clinic in Mantua, at the time one of Philadelphia’s most crime-laden areas. For decades, Carolyn was a continual presence in community activities. She was a lifelong member of the Junior League of Philadelphia, chairing the Junior League Garden Club from 1993-1995. She served on the Ludington Library Board of Trustees for over thirty years, and was the President of the Board from 1981 to 1990, when she tirelessly managed a capital campaign that resulted in the addition of a 9 000-square foot wing in 1985. She served on the Women’s Board of the College of Physicians of Philadelphia from 1975-2001 and was Trustee of the Library Company of Philadelphia and of the Friends of Rosemont College Library Board. She also served on the Vestry of the Church of the Redeemer, where she was a parishioner for more than 50 years. In addition, Carolyn had served as the Rector’s Warden at Christ Church Ithan. Carolyn was president of the Bryn Mawr Civic Association from 1988-1991 and was a founding member of the Lower Merion Preservation Trust and the Lower Merion Conservancy. She served on the Shipley School Board of Trustees from 1985-1994, chairing the Property Committee that oversaw the construction of the West Middle School, which opened in 1993. In 1989, Carolyn received the Founders’ Bank Quality of Life Award in recognition of her many contributions to the community she loved. A long-time member of the National Society of the Colonial Dames of America, Carolyn served as Registrar for the Commonwealth of Pennsylvania from 2003-2009 and Associate States Registrar from 2010-2013. Carolyn also received the Colonial Dames’ National Roll of Honor Award. Carolyn served as a Trustee of the McLean Contributionship, attending her last Board meeting just a week before her death. The foundation provides grants to support the environment, healthcare and education – a cause about which Carolyn was particularly passionate – in the Philadelphia area. The Funeral service will be held at the Church of the Redeemer on Saturday July 8 at 11 am. In lieu of flowers, contributions can be sent to either The Chester Fund for Education and the Arts, 200 Commerce Drive, Aston PA 19014 or The Providence Animal Center, 555 Sandy Bank Road, Media PA 19063.

Carolyn MacReynolds Raymond of Newtown Square Pennsylvania passed away on July 1, 2017 surrounded by her family. She is survived by her four children: Ruth, Doug (Lisa), David (Renee), and Elizabeth (Joe), her sister, Lynda, and brother, Randy,... View Obituary & Service Information

The family of Carolyn M. Raymond created this Life Tributes page to make it easy to share your memories.

Send flowers to the Raymond family.