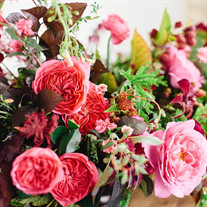 Cassandra F. Drake (Sanna) passed away on May 14, 2017, peacefully, in her apartment in Gladwyne, PA. Mrs. Drake was ninety years old. Born in New York City on February 24, 1927 to Walter S. Franklin and Cassandra S. Franklin, Mrs. Drake grew up in Ardmore, PA and was educated at St. Timothy’s School and received a BA in Economics from Vassar College. She was married in 1948 to Caspar W. Morris Jr, with whom she had four children. After his death in 1969, Mrs. Drake married Lawrence Drake in 1973 and remained with him until his death in 2001. Mrs. Drake was well-known as a creative, talented and artistic flower arranger. She specialized in niche arrangements and participated for over 30 years in the Pennsylvania Horticultural Society and the Philadelphia Flower Show. She received The Gardeners’ Silver Bud Vase 19 times, culminating with in the creation of a new base for the bud vase, in her honor. A long-time member of the Gardeners, Mrs. Drake became a judge for many PHS shows across the country as well as a mentor for other flower arrangers. She was recognized with the Medal of Merit, “For her knowledge of horticulture, her creative talent and artistic ability, the quiet way she shares her love of beauty and knowledge of flower arranging”. She was also a talented sculptress, who worked in both the clay and papier Mache mediums. Her signature accomplishments these mediums were her numerous dragons. In addition, Mrs. Drake was an avid supporter of art for the visually impaired, volunteering for a program at the Philadelphia Museum of Art, and providing transportation and services to blind artists for over twenty years. Kind and generous by nature, Mrs. Drake was very active in her charitable giving over many years to many charities benefiting the blind, wildlife, the environment, homelessness, and civil rights. She is survived by her four children and seven grandchildren. Funeral services will be held at St. Christopher’s Episcopal Church, 226 Righter’s Mill Rd., Gladwyne, PA, on Saturday May 20th at 2:00 P.M. In lieu of flowers, the family is requesting that donations should be made to the American Association For the Blind.

The family of Cassandra "Sanna" F. Drake created this Life Tributes page to make it easy to share your memories.

Send flowers to the Drake family.