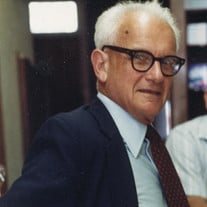 Charlie Dorkey On August 25, Charlie Dorkey passed away peacefully in his home of over 60 years. He was 96 years old. Charlie lived a full life that was filled with a long and successful career in manufacturing and real estate, much travel, a loving family, and many thousands of rounds of golf with friends. Charles Edward Dorkey, Jr. was born on August 2, 1921, in New York City. Growing up in Jackson Heights, Queens, he established himself as a strong student, except perhaps in French, at the Trinity School (Class of 1939). He then attended Dartmouth College where he was active in a number of the College’s outdoor activities. He was on the executive committee of the Dartmouth Outing Club, serving on its Cabin and Trails Council, vice president of the Ledyard Canoe Club, and a member of Bait and Bullet and of the Undergraduate Fire Squad. His lifelong interest in the outdoors started during the summers he spent at Camp Pathfinder on Source Lake in Algonquin Park, Ontario, Canada. Charlie graduated from Dartmouth College in January 1943 and entered military service the next month as a PFC in the Army Air Force. After basic training, he was stationed in Clarksdale, Mississippi, where he received a pilot’s license while training pilots. In 1945, he was transferred to Fort Benning to prepare for the invasion of Japan. The war would fortunately end before he was shipped out. He continued to serve from October 1945 to April 1946 as a second lieutenant at Fort Roberts in California. He remained on active reserve until January 1951. It was during his time in Mississippi that he met his eventual wife, Miss Nina Hughes “Peggy” O'Neal. Charlie and Peggy would be married in a lovely ceremony in the Clarksdale Baptist Church on June 22, 1946. They would buy a house in Ardmore and have two sons, Charles Edward "Trip" Dorkey III (b. 1948) and Robert Frederick "Rick" Dorkey (b. 1951 d. 2011). Peggy died in 1994. After the war, Charlie went to work for Frankoweave, Inc., a textile manufacturing firm on Torresdale Avenue in Philadelphia. He ran Frankoweave’s textile business until it decided to relocate in the mid-1960s to the South. Not wanting to give up his life in Lower Merion, he switched to a career in real estate. At first he worked for Pugh Realtors in Bryn Mawr. In 1970 he established Charles Dorkey Realtors and served as the county assessor for Lower and Upper Merion and Narberth and as Chairman and Board President of the Main Line Board of Realtors. Charlie would work in real estate appraisal in the Philadelphia area becoming a fixture of that community and industry. Charlie was elected and served with distinction as Lower Merion Township Commissioner for South Wynnewood from 1966 to 1978. He also served as chairman of the Ardmore Free Library, a director of the Penn Wynne Fire Co., and a director of Ard-Wood Civic Association. Charlie's love for his work and his community was such that despite retiring he was still doing appraisals this year. He did not forget Mississippi, as every summer until the early 1960’s he would pack the family in the Ford station wagon for the two-day drive to Clarksdale. There, between visits with Peggy’s family, trips across the Coahoma County line to the moonshiner, and dinners at Moon Lake, he played golf daily at the Clarksdale Country Club. He was a longtime member of the New York Athletic Club, third in seniority of membership at the University Club of New York and since 1963 a most active member of Rolling Green Golf Club. Charlie's later years were spent doing what he loved most: recounting stories of his grandchildren, Case, Jack and Molly, of whom he was immensely proud; spending time at Thanksgiving with his son, Rick, and his wife, Virginia; Christmas in New York City with his son, Trip, and his wife, Andrea; travelling annually with his sister, Margaret and her husband, Tom, to not just popular but also less-travelled locations; Sunday dinners with Fran and Reaves Lukens; and Friday dinners and golfing with his longtime friends, Fred Anton and Emily Ryan. He also made a point of visiting the various places dear to him: Camp Pathfinder, Trinity School, Dartmouth College and, of course, Clarksdale. Charlie is survived by his sister, Margaret McCormick (Tom) of Brookline, MA, his son, Trip Dorkey (Andrea Rose Rousseaux) of New York, NY and his grandchildren, Case Dorkey (Sylvia Kindermann) of Los Angeles, CA, Jack Dorkey (Lisa Mundy) of Portland, OR, and Molly Dorkey (Andrew Copley) of Athens, GA and his step-granddaughter Amelie Rousseaux of Los Angeles, CA. He is predeceased by his sister, Carol Norris, and his son Rick. Charlie was a regular feature in so many lives over his 96 years that his absence surely will be deeply felt. A memorial service will be held on September 30 at 11 AM at Chadwick & McKinney Funeral Home, 30 East Athens Avenue, Ardmore, PA 19003, where the family will receive guests after 10 AM.. In lieu of flowers, a contribution to the Ardmore Free Library is suggested (https://npo.justgive.org/ardmorelibrary). Charlie will be laid to rest next to wife Peggy, his sister, and his parents at Mount Hope Cemetery in Rochester, NY.

Charlie Dorkey On August 25, Charlie Dorkey passed away peacefully in his home of over 60 years. He was 96 years old. Charlie lived a full life that was filled with a long and successful career in manufacturing and real estate, much travel,... View Obituary & Service Information

The family of Charles E. Dorkey Jr. created this Life Tributes page to make it easy to share your memories.

Send flowers to the Dorkey family.