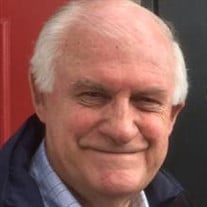 Charles Riddell Huntington, Sr. went home to his Lord on January 10, 2019, following heart surgery and extensive hospitalization. Beloved husband of Joann Kuerst Huntington for 54 years and father to Charles, Jr. andRichard Alfred, MD, he was born in Saint Louis MO on February 20, 1938, to Donald and Lucy Huntington. The family also lived in Minneapolis MN and Spartanburg, SC. Charlie attended the University of North Carolina at Chapel Hill on an NROTC scholarship where he received a BA in English and an MBA. While there he was President of Chi Psi Fraternity, and he was a lifelong Tarheels basketball fan. After serving as an officer in the U.S. Navy on the destroyer DD699, USS Waldron in the Mediterranean and Suez Canal region, he worked as Field Secretary/Visitor for Chi Psi Fraternity, advising chapters across the country. He joined Wachovia Bank as a Commercial Loan Officer in North Carolina. In 1972, he joined Robert Morris Associates (now Risk Management Associates) headquartered in One Liberty Place in Philadelphia and worked with Senior Lending Officers around the nation and the world, leading seminars regarding sound lending practices. As a resident of Paoli, PA for 43 years, Charlie served as Scoutmaster of BSA Troop 181 and received the BSA Silver Beaver Award. He also served as a Bible Teacher and Elder at Paoli and Narberth Presbyterian Churches. He was a Precinct Committeeman in Tredyffrin Township and was a strong supporter of our Founding Fathers’ values. In retirement, Charlie served in a volunteer capacity as Church Administrator at Narberth Presbyterian Church. Since moving to Tel Hai Retirement Community in 2015, and enjoying the nearby Amish farms, Charlie served on the Resident Council and in prayer ministries. Sailing in Cape Cod and watching the shore birds around Pleasant Bay were favored summer activities for decades, near where his Mayflower ancestors first settled. In addition to Joann, Charles, Jr. and Richard, he is survived by Sarah, Stacey, and Amy Huntington, and grandchildren Anthony, Christopher, Michael PFC-USMC, Charles III, Braden, Marigrace, Benjamin, and Julia, brothers Donald, Jr. and wife Eleanor of Cincinnati, OH, and David and wife Caroline of Lexington, SC, and many cousins, nieces and nephews. Services will be held on Wednesday, January 16 at 2pm at Washington Memorial Chapel in Valley Forge Park, where the family will receive guests after 1 pm. Burial in the General Huntington section of the cemetery will follow. Memorial gifts may be made to the American Heart Association and to Cornerstone Christian Academy, PO Box 5520, 1939 South 58th Street, Philadelphia PA 19143.

The family of Charles Riddell Huntington Sr. created this Life Tributes page to make it easy to share your memories.