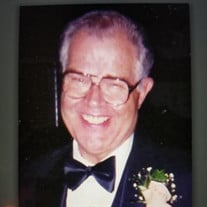 Charles Julian Lewis Charles “Chuck” J. Lewis, of Ardmore, PA, passed into the arms of Jesus June 4, 2020. His beloved wife, Joyce K. Lewis, of 66 years was at his side. Chuck was the loving father to Kelly L. Watson of Ardmore, Kerry L. and Roddy McNeil of Calgary, Alberta, Canada. He was predeceased by his son, Craig C. Lewis. He was the wonderful grandfather to Ellen M. and Shane Bangert of Virginia Beach, Jasmine L. Eubank of Calgary, Alberta, Canada, Kathryn J. and Jack A. Betancur of Ft. Campbell, KY, Sarah E. McNeil of Calgary, Alberta and Nicole C. McNeil of Halifax, Nova Scotia. He was the delighted and doting great-grandfather of his namesake Julian R.G. Betancur. Chuck was born in Columbus, Ohio on May 3, 1933. After graduating from Lorain High School, he went on to study Mining and Petroleum Engineering at Ohio State University. He received his BS in Physics from Baldwin-Wallace College and then attained his Teaching Certificate from California University in California, PA. With his love for learning, he took Continuing Education courses at the following schools: University of Pennsylvania, Duquesne University, Carnegie Mellon University and the University of Pittsburgh. Chuck also obtained a Real Estate license, a certification in Mediation, and was a Notary Public He was an Army veteran of the Korean War, serving from 1954 to 1956. Chuck was a deep believer and committed to Christ. He was very active in his beloved church, Narberth Presbyterian for 29 years. Chuck was a member of the choir and a Session member. He was a supporter and active in the prison ministry and a volunteer at Our Brother’s Place, a homeless men’s shelter in Philadelphia. Chuck was the founder of the “Chuck” Wagon, which is still going strong today for the early and in-between crowd at church. He loved learning and teaching about his Christian faith. He has brought many to the light of Christ who now walk in faith. Chuck retired from US Steel after 30 years of service. While at US Steel, Chuck succeeded in winning the National Safety Council’s coveted “Outstanding Recognition” award for a steel plant working more than ten million manhours without a lost time injury. He went on to spend many years in the political field in Allegheny County and the state of Pennsylvania. He was appointed to the Department of Labor by George H.W. Bush in 1989. During that time, he helped plan, organize, and established the “Alternate Dispute Resolution” program for the U.S. Department of Labor. He implemented the training program and became one of the first graduates of the program! The job that Chuck most loved was as a bus aide for the special need’s children of Lower Merion School District. He finally retired in 2008. Chuck and Joyce loved to travel! He treasured exploring Wales, Scotland and England tracing their heritage. They toured Austria and the Czech Republic with the NPC choir singing and spreading the love of Christ. Chuck cherished US history and was passionate about visiting historical sites. His favorite vacation spot was Calgary, Alberta with its majestic Rocky Mountains where he had the opportunity to walk on a glacier! Chuck once said he would live in Calgary if the winters weren’t so cold! He was an active member of the Welsh Society of Philadelphia. Chuck was a devoted and avid fan of the Ohio State Buckeyes, Pittsburgh Steelers and the Boston Red Sox. He cheered them all on! Chuck lived his life to the fullest! He, Joyce and Kelly had just returned from a trip to Arlington National Cemetery where his son, Craig, is buried when he passed onto Home. He will be greatly missed by all who came into contact with him. Until we meet again… A Homecoming Celebration will be determined. Burial will be private at Arlington National Cemetery In lieu of flowers, suggested donations may be made to the following: Pulmonary Lung Foundation 230 East Ohio Street Suite 500 Chicago IL 60611 Website: https://www.pulmonaryfibrosis.org/ways-to-give/honor-a-loved-one Narberth Presbyterian Church 205 Grayling Ave. Narberth PA 19072-0414 Website: https://www.narberthpres.org Philadelphia Salvation Army The Salvation Army Divisional Headquarters 701 North Broad Street Philadelphia, PA 19123. Website: https://pa.salvationarmy.org/greater-philadelphia/ways-to-give-to-the-salvation-army-of-greater-philadelphia-donating-volunteering-and-helping

The family of Charles J. Lewis created this Life Tributes page to make it easy to share your memories.

Send flowers to the Lewis family.