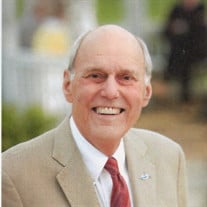 Charles Edward Rammel, of Newtown Square Pennsylvania, died at the age of 92 on January the 23rd, 2021. A resident of Dunwoody Village, he is survived by his wife of 65 years Joan Gidley Rammel; son Warren Webster IV and his wife Debbie; and daughters Deborah R. McKeel; Susan R. Buckley and her husband Walter W. Buckley III; and Carolyn L. Rammel and Brian M. Murphy. Charles and Joan have 5 grandchildren and 5 great grandchildren: Grandson Josh Webster his wife Angie, daughter Ella and son Rainer; granddaughter Courtney McKeel Eifler, her husband Ray, daughters Haylen and Ellyson; grandson Andrew McKeel, his wife Amy, and son Miller; granddaughter Alexa R. Buckley; and grandson Walter “Dutch” W. Buckley IV. Charles “Charlie” was born on August 27, 1928, and grew up in Alexandria, Virginia. He completed his education upon graduating from the Virginia Military Institute in 1949. Charles was then commissioned as a second lieutenant in the United States Army and was assigned to the 17th Infantry during the Korean War. After receiving the Purple Heart for wounds received in combat, Charles continued his military service as a member of the United States Army Honor Guard. During this time he lead among other events, the 1957 Inaugural Parade and numerous Tomb of the Unknown national salutes. He served as a social aide in the Eisenhower White House (a post for which he was born) and the enlisted model for the new United States Army Uniform for the Encyclopedia Britannica. After his honorable discharge from military service with the rank of 1st Lieutenant, he and Joan married, moved to Baltimore, Maryland and subsequently to Valley Forge, Pennsylvania. Charlie and Joan raised their 4 children in their country home before moving to Dunwoody Village in 2005. His professional years began in sales with the American Olean Tile Company and transitioned into the field of financial services. Upon his retirement, Charlie was a Vice President of the Dupont Trust Company. An avid athlete, Charlie enjoyed many a round of tennis at Waynesboro C.C., and Beach Haven Yacht Club. His days on the paddle court took him to run several MAPTA tournaments, and his engineering mind ensured the draws and ladder sheets were meticulously crafted. An avid follower of the Philadelphia Eagles and Phillies, he was a forever “sports fan”. Charlie was a natural leader and subsequently a Schuylkill Township Supervisor, Member of the Washington Memorial Chapel Vestry, President of the Dunwoody Village Residents Association, Member of the Board of Trustees, and Chairman of several committees. He brought light, joy and laughter to everyone he met. His southern charm, gentle and inquisitive approach, and empathy and care for others were just a few of his signature traits. And in addition to these, it will be his delightful sense of humor, ability to tell a story like no other, and magnetic smile that will be in our hearts, always. A private family service will be held to celebrate Charlie’s life. Memorial acknowledgement contributions may be directed to St. David’s Church, 763 South Valley Forge Road, Wayne Pa. 19087 or online at stdavidschurch.org/giving.

Charles Edward Rammel, of Newtown Square Pennsylvania, died at the age of 92 on January the 23rd, 2021. A resident of Dunwoody Village, he is survived by his wife of 65 years Joan Gidley Rammel; son Warren Webster IV and his wife Debbie; and... View Obituary & Service Information

The family of Charles Edward Rammel created this Life Tributes page to make it easy to share your memories.

Send flowers to the Rammel family.