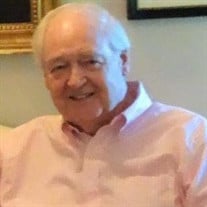 Charles W. Soltis, 80, (Chuck) of Gladwyne, PA passed away on April 6, 2019. Through his firm, Soltis Management Services, which specialized in executive search, human resource consulting and management and organizational assessment, Chuck touched the lives of many individuals. A graduate of Eastern University in 1962 with a degree in psychology, he later served on its Board of Trustees. As first president of the board of Chester County’s Historic Yellow Springs in 1973 he secured loans to support the preservation of the village and its mission to offer artistic and cultural programs. In 1977 he joined the board of the Chester County Historical Society becoming Vice-President and later President. He also served on the board of the Historical Society of Pennsylvania. In 2003 Chuck joined the Board of Trustees of Waverly Heights where he served for thirteen years, four as Chairman. An active member of Bryn Mawr Presbyterian Church for many years, he served as a member of the Music and Fine Arts Council and the Personnel Council and sang in the Senior Choir and “Singing for Life.” His love of music began as a boy chorister and soloist at Manhattan’s St. Thomas Choir School. A devoted friend of the school he was instrumental in founding the Alumni Association Board, which he joined in 2007 and was its president from 2009-2012. He also was a member of the Noble Guild, part of the Saint Thomas Planned Giving Society. More recently he continued his life-long love of music through his activities on the board of Philadelphia’s Lyric Fest, 2012-2016. Chuck is survived by his sister, Joyce Soltis Long, a daughter, Kristin Warriner, his wife of twenty-five years, Carol Eaton Soltis, and his step daughter and grandson, Kristin Wyatt and Jackson Wyatt. His Memorial Service will be held on Saturday May 4th. at 11 AM in the Sanctuary of Bryn Mawr Presbyterian Church. In lieu of flowers, donations in memory of Charles Soltis may be made in support of the Sidney Kimmel Cancer Center at Jefferson. Please make checks payable to Jefferson and mail to: Office of Institutional Advancement, 125 S. 9th Street, Suite 600, Philadelphia, PA 19107 or Soltis Family Scholarship Fund (Templeton Honors College), Eastern University, 1300 Eagle Road, St. Davids PA 19087

The family of Charles W. Soltis created this Life Tributes page to make it easy to share your memories.

Send flowers to the Soltis family.