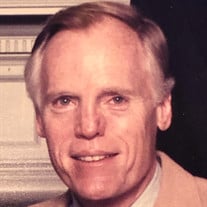 Dana Thompson Lerch of Willistown Twp., Newtown Square, PA died peacefully on Feb. 18th, 2020 at age 82. Beloved husband of Gretchen Young Lerch and father of Robert Bond Lerch (Elizabeth Laucks) and Richard Jones Thompson Lerch (Sarah Elizabeth Fineran); also survived by his grandchildren, Anna Bond Lerch, Elizabeth Jane Lerch, Elizabeth Mullan Lerch, Katharine Kingdon Lerch and Richard Jones Thompson Lerch, Jr.; a brother and a sister. Dana was born in Albany, NY in 1938 to parents Marlin E. Lerch and Janet Thompson Lerch who were originally from Iowa and most recently of Malvern, PA. The family moved to Buffalo, NY in 1944 and then to suburban Philadelphia in 1946 where Dana lived over his lifetime in three area counties, Delaware, Montgomery and Chester, but mostly in Haverford and Bryn Mawr. Dana spent part of every summer of his life at his family lake home, the place he loved most, Bowman Lake, Taborton, NY. Dana was a 1955 graduate of The Episcopal Academy, then a 1959 graduate of Cornell University where he was deeply involved with the Phi Gamma Delta fraternity and the Cayuga’s Waiters Choral Society, of which he continued to be involved through the alumni Waiters’ performances at Cornell reunions until recently. Dana also attended Harvard Business School. While still at Cornell, Dana married his high school sweetheart, Gretchen Ann Young. Their first date had been on his 16th birthday, attending the “Soph Hop” at Episcopal. The two enjoyed a wonderful marriage of sixty one years. Dana had quite a career in the world of finance and corporate bonds. He first learned the value of hard work as a teenager with a variety of jobs at Zane’s Market in Averill Park, NY; Hauf’s Furniture Store in Albany, NY; the Vanleer I. Bond Store in Drexel Hill, PA; The Sportsman’s Shop also in Drexel Hill, PA and even walked a summer postman route in Upper Darby, PA. Upon graduating from Cornell, he began his career in earnest with the commercial lending department of The Associates in South Bend, IN. Dana then returned to Philadelphia with Provident National Bank as a commercial lending officer, before becoming a Founder and Partner of Smyth, Akins and Lerch, Inc. a corporate bond specialty firm in Bryn Mawr, PA. When his partners retired, Dana continued the firm’s activities through Cowen and Company a New York, NY investment banking and brokerage firm as a Managing Director and Partner. Then, upon his own “retirement” he continued to be active until his final days as a consultant to Stock Market Mentor, a financial advisory newsletter and on-line educational forum. Outside of work, Dana was highly active in the community, fundraising for Episcopal Academy for a number of years and volunteering as an Auditor for Newtown Township in the 1960’s. A particular passion was Rotary Club International. Dana was a charter member and past president of the Bryn Mawr, PA club and was honored to be a Rotary Paul Harris Fellow. He was a devout Presbyterian and firm believer in helping others. With The Presbyterian Church, Dana was an Ordained Elder and contributed to the Newtown Square Presbyterian Church choir and acted as the chairman of the new organ fund in the 1960’s. At Ardmore Presbyterian Church through the early 1970’s, Dana was involved with the choir and acted as chairman of the board of trustees and chairman of the stained glass window restoration committee. Later, he became a member of Bryn Mawr Presbyterian Church where he and Gretchen had been married in the chapel on December 27, 1958. Most recently, Dana attended St. John’s Presbyterian Church, Devon, PA, enjoying the music program and the Reverend Patrick Marshall’s inspiring sermons. Dana was a long time member of the Merion Cricket Club in Haverford, PA and also enjoyed his social and professional memberships over the years at Schuyler Meadows Club in Loudonville, NY; the Racquet Club of Philadelphia; the Bond Club of Philadelphia; the Bunkers, Philadelphia, PA and the Philadelphia Securities and Exchange. In Dana’s “free time” and particularly during his retirement years, he enjoyed golf, tennis, classic and antique cars, choral music and crossword puzzles. As a sports enthusiast, Dana especially enjoyed a lifelong passion for the Philadelphia Eagles and was a long-time season ticket holder. Always a gentleman first, Dana was quiet, humble, honest, loyal, reliable and mostly treasured his immediate family, dedicating his life to their care. Dana was equally devoted to his precious Labrador retriever, “Willa”, who he was thrilled to have visit in the hospital before passing. Dana had a wonderful sense of humor and loved sharing that with his friends, family and, particularly, his sons. His Service will be private for the immediate family. In lieu of flowers, contributions may be made in Dana's memory to either , Juvenile Diabetes Research Foundation, 555 Croton Road, Suite 111, King of Prussia, PA 19406(www.jdrf.org/greaterdelawarevalley), Dana-Farber Cancer Institute (www.dana-farber.org) or Rotary International for ending Polio(https://www.rotary.org/en/our-causes/ending-polio). The family is requesting that family and friends please send any memories or stories they would like to share directly to the family or submit via www.chadwickmckinney.com

The family of Dana Thompson Lerch created this Life Tributes page to make it easy to share your memories.

Send flowers to the Lerch family.