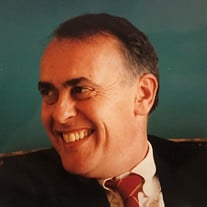 David Welles Strawbridge, 81, of Radnor, died Saturday, June 26, 2021. He is survived by his children, Christopher Welles Strawbridge and his wife Wendy Eiteljorg, Geoffrey Dows Strawbridge and his wife Jill Bruley and three grandchildren: Wyatt Eiteljorg Strawbridge, Emma Weiss Strawbridge and Reeves Elizabeth Strawbridge. He also leaves his older brother Francis R. Strawbridge III, and his younger sister Elizabeth Ann (Nancy) Nord, as well as his former wife, Mary Ellen Partel (née Burke). Dave was born on February 4th, 1940 in Bryn Mawr and attended the Haverford School, graduating in 1958, and then Trinity College, graduating in 1962. He soon began a long retail career, first working at Bloomingdale's in NYC for a year's training program before returning to Philadelphia and joining his older brother, cousins, and uncles at Strawbridge & Clothier. Working through a variety of positions at the store, he was successively an Assistant Buyer, Buyer, Assistant Store Manager, Store Manager, Director of Personnel and finally Vice President of Personnel for the entire organization. He became a member of the Board of Directors in 1978 and was a member of the 4th generation of the Strawbridge family to lead the company. He worked with the entire S&C store family from the sales associates to the managers to the loading docks, and was always known for his honesty, fairness, and genuine good will - echoing the family’s Quaker roots. A lifelong resident of the Main Line, he was an active member of the community, serving on the Board of the Red Cross for many years, as Chairman from 1993 to 1996. He also served on the Board of the Haverford School and the then Philadelphia College of Textiles and Science. He loved and spent his life attending Church of the Redeemer in Bryn Mawr, serving on its Vestry committee and as Rector’s Warden in the late 90s. Dave played tennis and squash and enjoyed working diligently each morning to solve the day’s “Jumble” in the Philadelphia Inquirer over the phone with his sister Nancy. He was a diehard Eagles fan and loved spending time down at the Jersey Shore. Later in his life, he re-connected with and met annually with friends he’d made while working summers at the Buck Hill resort in Buck Hill Falls in the Poconos. Family was very important to him. He was a proud grandfather to Reeves, Emma and Wyatt and “Uncle Dave'' to many cousins of Chris and Geoff, including Cynthia Strawbridge, Pamela (Strawbridge) Rosfelder, Lynn (Strawbridge) Edmondson, Meg (Strawbridge) Buttterworth, Andrew Nord, Will Nord, Ann (Nord) Gutierrez, Theo (Rand) Dotson, Sebastian Rand and Paul Rand. For years, he happily pitched in to help organize and always attended his mother Elizabeth Ann (Schwarz) Grange’s family’s Lowther family reunion - the “Fam Jam.” He was a kind and thoughtful man; private, but always there to listen to and serve others. He gave selflessly of himself and was an example to his children and his family, all of whom loved him and will miss him dearly. Funeral services will be held at 2:30pm, Saturday July 24 at the Church of the Redeemer, 230 Pennswood Rd., Bryn Mawr, PA, with a reception to follow at the church parish house. His service will be livestreamed on theredeemer.org In lieu of flowers, memorial donations may be made to The American Red Cross Southeastern PA Chapter or The Church of the Redeemer.

The family of David Welles Strawbridge created this Life Tributes page to make it easy to share your memories.

Send flowers to the Strawbridge family.