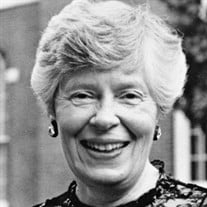 Dorothy B. Barker, 87, died on September 2, 2019. Dorothy (“Dode”) was born in Chicago on January 23, 1932 to Randolph and Ellen Dell Bieler. She attended public schools in Western Springs, IL where in 1950 she was valedictorian at Lyons Township High School. She graduated from Cornell University in 1954, later pursuing graduate studies in library science at the University of Pennsylvania. At Cornell, she was co-chair of the Student Union and a member of Kappa Kappa Gamma sorority. She met classmate Clyde Barker whom she married in 1956, last month celebrating 63 years together. In 1958 after Clyde graduated from Cornell Medical College the couple moved to Philadelphia for Clyde’s surgical internship at the University of Pennsylvania; he has since served on the surgical faculty and continues as Professor of Surgery. In her early years, she was a teacher of elementary school, first at The Ecole in New York City and subsequently kindergarten and 1st grade in New Jersey public schools. Living in the Philadelphia western suburbs for 61 years (Havertown, Wynnewood and Haverford), she was on the Board of Directors of Friends’ Central School and the Board of Trustees of The Episcopal Academy from which all four of her children graduated. She was a member of the Merion Cricket Club. A lifelong devotee of classical music, she played piano and organ and had a large repertoire of pieces, favoring Chopin and Gershwin, and was a season subscriber at the Opera Company of Philadelphia for over forty years. At the Philadelphia Orchestra, she was a volunteer in the Education Department. She championed every interest and endeavor of her husband and children. At the Hospital of the University of Pennsylvania where her husband was Chief of Surgery from 1983-2001, she hosted each year a Christmas party in her home for over 200 surgical house staff, faculty and other members of the hospital community and a summer picnic for interns, residents and faculty. She started the surgical residents’ library. She also founded and directed a free lunchtime performing arts program for the hospital’s faculty, students and patients, recruiting professional artists for an audience that often exceeded 150. She served as an organizer of the Abrahamsohn Committee, a 100-yr-old organization that visits and delivers flowers and plants to every patient in the hospital at Easter and Christmas. She was a fundraiser for the transplantation patients’ family house at Penn where transplant patients and families have access to low-cost living before and after operations. For many years she was a volunteer for the annual Philadelphia Antiques Show of which the proceeds traditionally went to the Hospital of the University of Pennsylvania. In 1993 she was chairman of the show. She was a long-term member of First Presbyterian Church in Philadelphia where she served as an Elder and where all of her children were baptized. She was an organizer for a year-long celebration held for the 300th anniversary of the founding of First Presbyterian, culminating in an event at the Franklin Institute at which she presented a commemorative crystal bowl to Mayor Ed Rendell. She is survived by her husband Clyde, her sister Jean, and four children: Fred, a neurosurgeon at MGH in Boston and his wife Marilyn, John, an actor in Philadelphia community theater and his wife Gwen, Bill, a financial advisor in Washington DC and his wife Diana, and Elizabeth, a non-profit administrator in New York City, as well as six grandchildren, Katherine, Rebecca, George, Erik, Allison, and Chase. A dedicated animal lover, her houses served as homes for a succession of Labrador Retrievers and cats. A memorial service will be held on October 6th at 1:30pm at First Presbyterian Church, 201 S 21st St., Philadelphia, PA. In lieu of flowers contributions can be made to the Clyde F. Barker Penn Transplant House.

The family of Dorothy B. Barker created this Life Tributes page to make it easy to share your memories.

Send flowers to the Barker family.