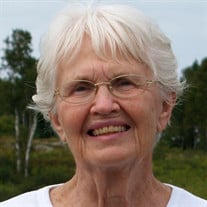 Dorothy "Dottie" (Frizzell) Williams, 88, of Wynnewood, PA and Jonesport, ME, died on March 26, 2017. She was born in Philadelphia, PA on February 23, 1929 to parents Dorothy (Spear) Frizzell and James Frizzell. She spent her early childhood in Penn Wynne, PA, then moved with her mother to Braintree, MA. She graduated from Thayer Academy in Braintree and from Western Maryland College ((now McDaniel College) in Westminster, MD. Artist, crafter, skater, mother, and friend, Dottie embraced life fully with enthusiastic curiosity. With her outgoing personality and zeal for meeting new people and learning new things, she was never without something to do or somewhere to go. She was extremely proud of her children and grandchildren and loved spending time with them during holidays and summer vacations. Her great passion was figure skating, which she pursued at the Philadelphia Skating Club and Humane Society for over 50 years. She was an ice dancer and a founding member of the Club's first adult competitive synchronized skating team. Dottie was also passionate about art in all forms. She taught art for a number of years at the Media Elementary School, where she and her students covered the corridor walls with colorful and gigantic "supergraphics." After retiring from teaching, she opened a design studio in Devon, PA. Eventually she moved her studio to Jonesport, ME, where she spent many glorious summers creating and selling fused glassware and jewelry, visiting with friends and family, and eating as many lobsters and blueberries as possible. She was a loving and devoted mother and grandmother and a caring friend, and she will be greatly missed. Survivors include daughter Ann Williams of Bedford, MA; son David Williams, daughter-in-law Flore Williams, and granddaughters Sabine and Annick Williams, all of Hartsdale, NY; Ann and David's sister Jennie Williams and her family, of Pittsburgh, PA; and stepchildren Melanie Mathews of Hazel Crest, IL, Jeffrey Todd of Ashville, NC, and Linnea Todd of St. Joseph, MI and their families. A memorial service will be held at Chadwick and McKinney Funeral Home, 30 East Athens Ave., Ardmore, PA on June 24, 2017 at 1 pm. After the service, a celebration of Dottie's life will be held at the Philadelphia Skating Club and Humane Society, 220 Holland Ave, Ardmore, PA. In lieu of flowers, donations in Dottie's memory may be made to the U.S. Figure Skating Memorial Fund, 20 First Street, Colorado Springs, CO 80906.

Dorothy "Dottie" (Frizzell) Williams, 88, of Wynnewood, PA and Jonesport, ME, died on March 26, 2017. She was born in Philadelphia, PA on February 23, 1929 to parents Dorothy (Spear) Frizzell and James Frizzell. She spent her early childhood... View Obituary & Service Information

The family of Dorothy F. Williams created this Life Tributes page to make it easy to share your memories.

Send flowers to the Williams family.