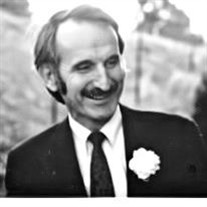 Dr. Edward "Ned" Olin Goodrich of Ardmore, PA, passed away peacefully in his sleep on Sunday December 10th 2017 at the Philadelphia VA Medical Center Hospice and Palliative Care Unit. Dr. Goodrich was born in New Haven, Connecticut on May 7th, 1925 to Edward Olin Goodrich Sr. and Laura Mae MacKay. His father, who could trace his ancestry back to New England's earliest English settlement, was a manager at the Ansonia Brass Company, while his mother was the daughter of immigrants from Glasgow, Scotland. He attended the Hopkins School in New Haven, Connecticut on scholarship and went on to Yale University, where he graduated in the war class of 1944. After completing his medical studies at New York Medical College in 1949, Dr. Goodrich joined the U.S. Army as a battalion surgeon and was promptly deployed to the Korean front. During one particularly fierce battle, Dr. Goodrich treated and then helped evacuate dozens of wounded soldiers before their position was overrun by the Chinese army. For his gallantry in battle, Dr. Goodrich was awarded the Silver Star, the third-highest decoration awarded by the U.S. Armed Forces. After his return to civilian life in 1959, Dr. Goodrich continued to serve his country in the U.S. National Guard, rising to the rank of Colonel. As a civilian he established a successful surgical practice. Among his many accomplishments was performing groundbreaking research, including the first ever successful canine liver transplant. In the early 1960s, while living in Santa Fe, New Mexico, he assisted in founding the Santa Fe Preparatory School. The school opened in 1963 with sixty-three students and today is a fully accredited, coeducational day school serving approximately 320 students with over 1700 alumni. In 1980 he suffered a massive stroke that ended his surgical career. His family then moved to Philadelphia where he partially recovered and was eventually able to continue his medical career at various hospitals in Philadelphia. Dr. Goodrich, known as a “Tough Old Yankee,” never shied away from a challenge. In his early 80s he took up rowing, and with his son Alfred was able to win three Bayada handicap regattas, two while burdened with a terminal diagnosis. His lifelong commitment to the happiness of those he loved was evident to the very end. Husband of the late Alfreda Verratti Goodrich and former husband of the late Gladys Patricia Goodrich, he is survived by five children, Edward Olin Goodrich III, Timothy Jerome Goodrich, Jonathan Patrick Goodrich, Alfred James Goodrich and Claudia Goodrich Bender. He has four grand children, Timothy Joseph Goodrich, Jennifer Richelle (Goodrich) Knueven, Mackay Ann Bender and Clayton Edward Bender. His viewing will be from 6pm to 8pm on Fri. evening at Chadwick & McKinney Funeral Home, 30 East Athens Ave., Ardmore, PA 19003. A Masonic Service will take place at 7pm. His funeral will be held at the Main Line Unitarian Church, 816 Valley Forge Rd., Devon, PA on Sat. Dec. 16th at 11am. Int. Valley Forge Memorial Gardens. Memorial contributions may be made to Community Volunteers in Medicine, 300 Lawrence Dr, West Chester, PA 19380. https://interland3.donorperfect.net/weblink/weblink.aspx?name=E330224&id=1

The family of Dr. Edward O. Goodrich Jr. created this Life Tributes page to make it easy to share your memories.

Send flowers to the Goodrich family.