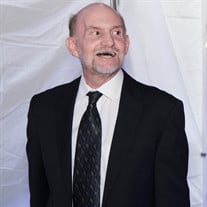 Edward S. Knight, 60 years old, lost his battle against leukemia on April 26th surrounded by family at the Hospital of the University of Pennsylvania. Edward is survived by his 3 children, Patrick (Sara) Knight, Erika Knight and Kristopher Knight, and their mother Deirdre Knight. Also his sister Carol Flaig (Greg) and Charles Knight. He leaves behind several aunts, uncles, nieces and nephews. Edward was also predeceased by his mother Joyce Knight (April 21, just 5 days prior to his death), his father, Daniel Knight, his sister, Jennifer Yoder and niece, Abigail Yoder. Growing up, Edward enjoyed summer vacations with his family in the Outer Banks, North Carolina and Lake Bomoseen, Vermont. The family owned a cabin on Lake Bomoseen. The cabin was a place that he loved to share with friends and eventually his own family. It quickly became a favorite place for him to spend time with his children. He would share vacations hiking, boating, climbing 'slate mountain' and fishing as well as many other adventures. Edward was an active volleyball player, playing with friends at the YMCA, weekend all day tournaments and USVBA competitively. This was a passion he passed on to his children. Edward enjoyed sharing the interests of his children from their classes in school to attending their extracurricular activities, including cheering on Patrick and Kristopher during volleyball games and a proud supporter of Erika who works for the Philadelphia Project. He is already missed terribly but we have comfort in knowing he is no longer suffering. Edward graduated Cum Laude from Widener University with a Bachelor Degree in Accounting. He worked as an accountant for AmeriGas the last 10 years, leaving behind a group of co-workers who were like family to him. Please join us in a joint memorial service for Edward and his mother, Joyce Knight on Saturday, June 8th at 11am with a light lunch to follow. The service will be held at Narberth Presbyterian Church, 205 Grayling Ave., Narberth, PA 19072.610-664-4880 In lieu of flowers please consider contributing to The Philadelphia Project @ http://thephiladelphiaproject.com/knight or Leukemia Research Foundation, 191 Waukegan Road, Suite 105, Northfield, IL 60093 847-424-0600 www.allbloodcancers.org

Edward S. Knight, 60 years old, lost his battle against leukemia on April 26th surrounded by family at the Hospital of the University of Pennsylvania. Edward is survived by his 3 children, Patrick (Sara) Knight, Erika Knight and Kristopher... View Obituary & Service Information

The family of Edward S. Knight created this Life Tributes page to make it easy to share your memories.