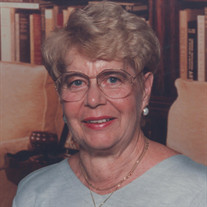 Elizabeth Jane Allen, aged 85, of Philadelphia, PA, died peacefully on January 30, 2018. Wife of Robert C. Allen, mother of Robert C. Allen, Jr., Deborah E. Allen, and Meredith Allen Wiggins, Elizabeth was also grandmother of 4. A memorial service will be held at Church of St. Martin-in-the-Fields on Sat., Feb. 17 at 11:00 am followed by a reception at the church. In lieu of flowers donations may be made to the National Audubon Society or to the All Saints Fund of Church of St. Martin-in-the-Fields. Born in Philadelphia, PA on February 25, 1933, to Ralph H. Purvis and Elizabeth Noyes Boyd Cull, Elizabeth grew up in the East Falls area. She was a proud alumnus of Girl’s High School, graduating in 1949. Elizabeth had a distinguished career in the healthcare field, ending as Senior Vice President/Principal at Garofolo, Curtis and Company, where she specialized in physician recruitment and human resources consulting. Prior to this Elizabeth was Associate Executive Director of the Pennsylvania Osteopathic Medical Association, with responsibility for legislative activity and communications. In addition Elizabeth served as Public Relations/Development Director for several area hospitals, where she won awards for her publications. Elizabeth also served as the Director of the Division of Public Affairs and Chief Development Officer of the Academy of Natural Sciences in Philadelphia. During her time at the Academy she successfully completed a $10 million capital campaign. Elizabeth had a life-long commitment to community service and cultural organizations. In 1955 she helped to found the National Cystic Fibrosis Foundation. In the 1970’s she served as chair of the Wissahickon School Board in Ambler, PA. Elizabeth was a trustee of Gretna Productions, which produces the American Show Festival, and a Director of the Hershey Symphony Orchestra. After she and husband Robert retired to Marco Island, Florida, Elizabeth became the Chairman of the Board of Trustees of the Marco Island Medical Center. A life-long Episcopalian, Elizabeth also helped St. Marks of Marco Island run a successful capital campaign to build a beautiful new sanctuary. Elizabeth was also an avid traveler and bird watcher who worked for environmental causes. Her intelligence, commitment, generosity, and whimsical sense of humor will be greatly missed.

The family of Elizabeth J. Allen created this Life Tributes page to make it easy to share your memories.

Send flowers to the Allen family.