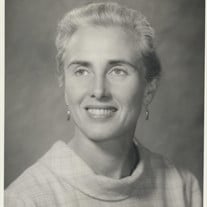 Elizabeth “Betty” Reimann Bodine 10-11-20 to 7-7-17 Betty Bodine was a kaleidoscope in the lives of her children, friends and colleagues. So many bright faceted colors,and movement to and fro as the shapes shimmer with light. Some bright colors: She was born in the old Lankenau Hospital, lived on Arbutus and moved to Phil-Ellena Street in Germantown when she was about 16. Her mother, Elsie (we called her “Mema”) accompanied her to Germantown Friends on the Walnut Lane trolley and in the afternoon Mema would return to bring her home. This wonderful use of public transportation ended when Gross Papa Bein (Mema’s father) bought them a car. While at Germantown Friends, an early report card reported that “Betty shows promise of good development and fertile individuality” but also warned that she “is not good about cleaning up, but improving”. These admonishments would follow her for many years. She was an outstanding student at GFS, and graduated Valedictorian of her class; her early years of success as a reader (report card from about 1st grade: “Betty has grasped the mechanics of reading very quickly [and is]one of our best readers”) provided her with much joy as she majored in English at Smith, received an MA in English at Penn, read the NY Times until the last days of her life, and belonged to a book club at Foulkeways. Mentored by Dick Tyre, the readers took on textual issues of significance and ambiguity within each tome. Her children learned early on that reading was not just a gift, but a responsibility in English, and occasionally French and Latin. She herself also read and spoke some German, a requirement in the Bein/Reimann household. A bright color: Betty’s father, Stanley Reimann, was by profession a pathologist, but by avocation an avid and exceptionally fine amateur pianist. He taught her to sight read by the “don’t stop playing for any reason” method, and while she may have shed a tear or two early on, she too was an accomplished pianist. She studied with Rudolf Serkin, played a Beethoven piano concerto with the Smith orchestra, played the piano for various vesper services, and continued to practice and enjoy her piano until just a year or so ago. She sang at Dr. Henry Drinker’s musical evenings (first date with John Bodine is rumored to have been at one of these singing parties) with her musical friends. Most importantly, she played chamber music with friends at home (her children have fond memories of Shubert’s “Trout Quintet” wafting up the stairs where they sat, out of the musicians’ way), at the Settlement Music School, and with her children and grandchildren. Another bright color: Betty had friends everywhere –at the non-profits she loved (AFSC, Settlement Music School, Planned Parenthood and others) visitors with the International Center; among John’s Rhodes Scholarship friends in Philadelphia and at Oxford; at Foulkeways where she lived for 27 years; in foreign countries she visited; within the GFS community, Smith College and its Board of Trustees (she served as an alumnae trustee with a direct impact on the School for Social Work); and among her children’s friends. We heard stories about various boyfriends and were amazed and delighted when Alan Erslev, a friend from her past, resurfaced and was Betty’s devoted companion for eight wonderful years following the deaths of their respective spouses. These friends shifted colorfully in and out of her life and we want to acknowledge our admiration and thanks to them all. And finally - Movement to and fro: Betty and her husband John traveled all over the world –to England; Russia; Iran; Peru; by boat around the Caribbean Islands; for several weeks each winter to Rincon, PR; Bermuda;Germany;the CM Ranch in Wyoming; Scandinavia: (her remarkable trip to Denmark with the Experiment in International Living in 1939 was almost a disaster when her father found out she had been placed with a “family” of hookers). Summers were a time for camping, month-long visits to the Smith family compound outside Freeport, Maine and to her parents’ house in the Poconos. After John Bodine’s death, Betty traveled with a granddaughter to Chile, with another granddaughter to China; on safari to Africa; to Australia and New Zealand; to France; with Elderhostel to Seattle and Victoria; and to England and Berlin for weddings of grandchildren. Perhaps she would have enjoyed a visit to the moon – who knows? In the words of George Eliot, 1861: “ The years seem to rush by now, and I think of death as a fast approaching end of a journey – double and treble reason for loving as well as working while it is day”. Regard your own life too, as a kaleidoscope, savor its bright colors and the shimmering movements to and fro. We rejoice in the life of Betty Bodine. The mother of Susanna Holahan (the late Thomas) of New Haven, CT; Amelia Bergmann (Jacob) of Lexington, MA; Lucy Nattrass (John) of Manchester, England; and Cornelia McCann (Brook) of Bryn Mawr, PA. In addition to her daughters, she leaves to cherish her memory eleven grandchildren and six great grandchildren. She was predeceased by her husband of 48 years, John W. Bodine; her parents, Dr. Stanley P. and Elsie B. Reimann; her sister Pauline and brother-in-law George Nehrbas; and her son-in-law Thomas Holahan. Her Memorial Service will be held on Sun. July 16th at 2:30 PM in the Auditorium at Foulkeways. In lieu of flowers, the family suggests a gift to one of these non-profits, with “in memory of Elizabeth Bodine” on the advice line of a check; gifts may also be made online: The American Friends Service Committee (afsc.org) 1501 Cherry St. Phila, PA 19102; Settlement Music School (settlementmusic.org) Amelia Schmertz, PO Box, 63966, Phila, PA 19147; Planned Parenthood of Southeastern PA(ppsp.org) Attn: Development, Planned Parenthood of Southeastern PA, 1144 Locust St. Phila, PA 19107. For additional memories of Betty’s life, please click here: www.chadwickmckinney.com

Elizabeth &#8220;Betty&#8221; Reimann Bodine 10-11-20 to 7-7-17 Betty Bodine was a kaleidoscope in the lives of her children, friends and colleagues. So many bright faceted colors,and movement to and fro as the shapes shimmer with light. Some... View Obituary & Service Information

The family of Elizabeth R. Bodine created this Life Tributes page to make it easy to share your memories.

Send flowers to the Bodine family.