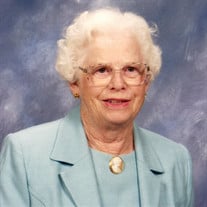 Else Bohn-Jespersen Bergkvist, 94, died on Sunday, February 11, 2018 at Waverly Heights in Gladwyne, PA. Else was born on October 25, 1923 in Horsens, Denmark. Her parents were Erik Bohn-Jespersen and Gudrun Clara Marie Larsen. Else was the youngest of five children. She had a very happy childhood in Denmark. Else’s father, Erik, was a Lutheran Minister and moved with his family from Horsens to Bogense, Bornholm and Gentofte as Else grew up. After completing high school, Else attended Nursing School in Copenhagen. She worked for several years as a pediatric nurse at the Danner House Orphanage. Else’s plan was to marry and settle near her friends and family in Denmark. Life brought a surprise, though. In 1948, Else visited her sister Gunvor in Greenland. At a New Year’s Eve dance on the American Naval Base in Gronnedal Else met Carl Ivar Bergkvist, a United States Naval Ensign. The two fell in love and were married on July 24, 1949 in Gentofte, Denmark. The wedding ceremony was performed by Else’s father, in English and in Danish. Else moved with Carl to his home in America, and they were married for 66 years. She was very proud to become an American citizen in 1958. Carl’s career as a Hospital Administrator led the couple from Massachusetts to Illinois, Iowa, and finally Pennsylvania. Along the way their family grew with the joyful additions of Carl Erik, Linda Sue, and Thomas Allen. In 1989, Else and Carl retired to Cape Cod, Massachusetts. They lived there very happily for the next 27 years until Carl’s death in 2016. They loved the beaches and the beautiful towns of the Cape, and one of their greatest pleasures was sharing the nature and the activities of the Cape with many, many friends and family. All were welcome, but their most joyful treasures were visits from their children and grandchildren. Else was proud to be a homemaker. She was very involved in the lives of her children and grandchildren and also in the community. Else was accomplished in sewing, knitting and needlework and won a blue ribbon for cross stitch at the Illinois State Fair in 1950. Else enjoyed playing bridge with her friends and spending time in her garden. She loved to take long walks, bicycle and swim. Else was very active in the Red Cross, Cub Scouts and League of Women Voters and taught Sunday School for many years. Else volunteered at the Bryn Mawr Hospital Auxiliary Thrift Shop and later was an integral member of the Cape Cod Hospital Auxiliary. Else chaired the Auxiliary Holly Berry Bazaar. Else and Carl loved to travel. During their marriage they took numerous cruises and traveled to Denmark, Greenland, all of Europe and the British Isles, Russia and the Caribbean. Else was delighted to have visited 44 of the 50 United States. Church life was important to Else and Carl. They were members of the Swarthmore United Methodist Church in Swarthmore, PA and later members of St. Peter’s Lutheran Church in Harwich, MA. In addition to her parents and husband, Else was predeceased by her son Carl Erik Bergkvist; her sister Marthe Krag-Olsen and her husband, Axel; her brother Aage Bohn-Jespersen and his wife, Else; her sister Gunvor Dano and her husband, Ivar; her brother Axel Bohn-Jespersen; her nephew Knud Bohn-Jespersen and her niece Lise Dano. Else is survived by her daughter Linda Pollock and son-in-law, Lee Pollock; son Thomas Bergkvist and daughter-in-law, Laurie Varlotta Bergkvist; grandson Ryan Pollock and granddaughter-in-law, Tora Olafsen; grandson Andrew Pollock; grandson Daniel Pollock and granddaughter-in-law, Gail Corneau; granddaughters Kristen Bergkvist and Carolyn Bergkvist; great-granddaughter Ingrid Pollock; sister-in-law Else Bohn-Jespersen and many nieces and nephews in Denmark. A Memorial Celebration of Life will be held on Saturday, March 3, 2018 at 10:30 AM at the Swarthmore United Methodist Church at 129 Park Avenue, Swarthmore, PA 19081. Burial will follow at Edgewood Memorial Park, 325 Baltimore Pike, Glen Mills, PA. In lieu of flowers, donations may be made to the Swarthmore United Methodist Church or to the Orleans Chapter of the Cape Cod Hospital Auxiliary at CCHA-O, 87 Old Bog Road, Brewster, MA 02631.

Else Bohn-Jespersen Bergkvist, 94, died on Sunday, February 11, 2018 at Waverly Heights in Gladwyne, PA. Else was born on October 25, 1923 in Horsens, Denmark. Her parents were Erik Bohn-Jespersen and Gudrun Clara Marie Larsen. Else was the... View Obituary & Service Information

The family of Else Bergkvist created this Life Tributes page to make it easy to share your memories.

Send flowers to the Bergkvist family.