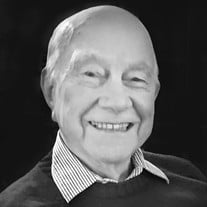 Eugene D. Conroy, known to friends as Gene, passed away on July 1, 2018, at the age of 84 years. Gene was a native of Short Hills, New Jersey. He attended The Pingry School, Cornell University, and MIT, earning Bachelor’s and Master’s Degrees in Electrical Engineering. He was a member of Delta Chi and Tau Beta Pi, the Engineering Honor Society. He began a long and distinguished career with IBM in 1957, serving in the critical skills program in the US Navy and then moving to Poughkeepsie, NY, where he met and married his wife Anne (nee Naftzinger) in 1965. While at IBM he became a Senior Programmer, doing groundbreaking work on the OS 360 computer system and earning numerous patents and Outstanding Contribution Technical awards. After retiring from IBM in 1993, he formed NSM Systems, a software consulting company. Gene loved spending summers at a house on Lake George shared with close friends. The Rock was the scene of many wonderful times with family, friends, and guests. In 2012, Gene and Anne relocated to Waverly Heights, Gladwyne Pa. Gene played the guitar and enjoyed accompanying friends and family with rollicking good times. He was an avid vegetable gardener who specialized in growing tomatoes with an engineer’s approach and attention to detail in planting and growing. He had a lifelong love of films and enjoyed sharing it with friends and neighbors as Chairman of the Waverly Movie Committee. He is survived by his wife of 53 years, Anne, son David, daughter Katherine Moynagh, son-in-law Dermot, three grandchildren, and sister Melissa. A Celebration of Gene’s life will be held at 2:00pm on July 21 at Ardmore Presbyterian Church, 5 W. Montgomery Ave., Ardmore, PA 19003. Memorial donations in memory of Gene can be made to Waverly Heights Foundation, 1400 Waverly Rd, Gladwyne, PA 19035 or the Lake George Land Conservancy (www.lglc.org).

Eugene D. Conroy, known to friends as Gene, passed away on July 1, 2018, at the age of 84 years. Gene was a native of Short Hills, New Jersey. He attended The Pingry School, Cornell University, and MIT, earning Bachelor&#8217;s and Master&#8217;s... View Obituary & Service Information

The family of Eugene D. Conroy created this Life Tributes page to make it easy to share your memories.

Eugene D. Conroy, known to friends as Gene, passed away on July...