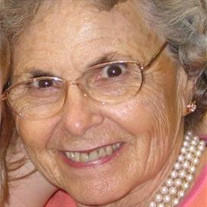 Florence Madeline Scott BRYN MAWR – Florence M. Scott, 98, passed away on December 17, 2020 at Beaumont at Bryn Mawr, a retirement community in Bryn Mawr, Pennsylvania. Florence was born January 9, 1922 on Staten Island in New York City. She was the third of five children of Frank and Ida Hauber, recent immigrants from Germany. They were a farming family and lived and worked a small nine-acre farm in a surprisingly rural community within a short ferry ride to Manhattan. They had farm animals and crops which provided most everything they needed. All members of the family pitched in and the farm prospered, even serving as a source of fresh vegetables and flowers for markets in the nearby city. She met the love of her life, Winfield A. Scott, at a dance with a group of Army officers from nearby Raritan Arsenal while training to become a registered nurse at the Perth Amboy General Hospital in New Jersey. She married at age 22 on May 3, 1944 in Jackson, Mississippi while he was a Lieutenant Colonel on active duty. When “Scotty” passed away at age 96 in 2010, they had been married an amazing 66 years. At the end of the war Florence and Win settled in the Philadelphia suburb of Springfield. Florence assumed the role of mother and homemaker. The first child, a son, was born on Florence’s birthday, January 9, 1946. Three other children completed the family in1948, 1950, and 1957. Win returned to his pre-war employment at Bell Telephone Company of Pennsylvania. He worked there and at Bell’s parent company, AT&T, for 40 years retiring in 1977 as VP-General Manager of the eastern region of Pennsylvania and Delaware. Florence and the family were transferred by Bell several times as Win’s career progressed, but they lived mostly in the Philadelphia area, including 52 years in Rosemont. As a teenager, Florence was introduced to Lake George in the Adirondacks by her best friend whose family owned a small summer cabin on the lake. Florence and Win vacationed there with their young family and eventually bought property and built a lakeside “camp” in Hague, New York in 1963. That became a family retreat and inspired many joyful family moments and traditions, spanning to this day. After Win’s passing, Florence stayed on at the Rosemont home for a couple of years, and then took up residence at Beaumont at Bryn Mawr, a near-by retirement community. Her positive attitude and willing smile brought joy to her family and friends. Florence had a wonderfully easy, self-confident manner and was warm, positive, and compassionate to all she met. She was hard-working, a character trait learned early in life on her family’s Staten Island farm, and always kept her homes (and children) immaculately clean, groomed, and organized. She had a “green thumb”, a special knack for growing beautiful flowers and plants and was accomplished at sewing, needlepoint, and making hooked rugs, examples of which adorn family homes today. Her cooking skill and devotion to always feeding wonderful, tasty food to her family was remarkable. Many recipes have become legendary among family members, including chocolate chip cookies, pecan pie, and batter-fried French toast. Florence’s lifelong passion was the health and happiness of her immediate and extended family. She was nurturing, selfless, and loving and always overjoyed to see family members. Regardless of age or situation in life, she gave strength and encouragement to family members and made each individual feel important and special. Surviving Florence are her four children and their spouses: Donald, Christine and Richard Oliver, Kenneth and Nancy, and Richard and Becky; 9 grandchildren; and 8 great-grandchildren. Florence will join her husband at Westminster Cemetery in Bala Cynwyd, Pennsylvania. Covid restrictions will prevent a memorial service. However, if you’re inclined, Mom loved the family’s summer home on Lake George in the Adirondack Mountains of New York. She supported The Fund for Lake George, P.O. Box 352, Lake George, New York, 12845, (518) 668-9700, www.fundforlakegeorge.org.

The family of Florence M. Scott created this Life Tributes page to make it easy to share your memories.

Send flowers to the Scott family.