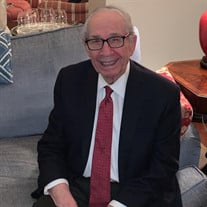 Francesco Leto August 6, 2020, age 95, of Wayne, PA, formerly of Greenhill Farms, Philadelphia. Beloved husband of the late Alice Joan (nee DeMasi). Devoted father of Francis (Anita) and Bruce (Robyn). Loving grandfather of FJ, Christopher, Bruce, Jr. and Alexandra. Uncle to numerous nieces and nephews. Also survived by a brother, Nicola, of Catanzaro, Italy and predeceased by 6 other siblings. Born in Santa Caterina del’Ionio, Italy, he was a medical doctor, having attended medical school at the University of Naples, Italy, and practicing until June of 2018. During his 63 year career as a doctor, he had a private medical practice in South Philadelphia. He was affiliated with Saint Agnes Hospital for many years, having served as the President of the Medical Staff, and also worked for 38 years at the Sidney Hillman Medical Center of the Amalgamated Clothing Workers Union, where he also served as the President of the Medical Staff. When he retired, he was a member of the medical staff at Methodist Hospital. In 2019, he was honored by the Philadelphia College of Physicians for 50 years of membership. He also served as the doctor for the Italian consulate in Philadelphia for many years, as well as the physician in residence for Domino Sugar’s Amstar plant in South Philadelphia. Frank was also very involved in the Philadelphia cultural scene in the 1970s and 1980s. He was the president of the Lyric Opera of Philadelphia and supervised its merger with the Philadelphia Grand Opera Company in 1975. Thereafter, he was the President of the newly formed Opera Company of Philadelphia. In 1976, he commissioned an opera to be performed in Philadelphia for the bicentennial by renown composer, Gian-Carlo Menotti. He also conceived of and founded, the Luciano Pavarotti International Voice Competition, which took place in Philadelphia for many years. He was also a Board member and President of the Academy of Vocal Arts in Philadelphia. He was a member of the America-Italy Society for many years, serving on its Board and holding several officer positions and was honored at their first ever Gala in 2016 for his contributions to the society over 50 years of membership. He was also a member of the Union League of Philadelphia, where he was honored in August of 2018 for 50 years of membership, and a member of the Merion Cricket Club. He was also recognized over the years by numerous organizations in Philadelphia for his community involvement. Despite all of his accomplishments, the most important part of his life was his family. He enjoyed traveling with his wife of 39 years and with his family in Italy, throughout Europe and in the United States. He was completely devoted to his sons and his grandchildren. He also enjoyed summers with his family and friends at the Jersey shore. Funeral services and internment are private and a celebration of life will be held after the pandemic. Donations in Francesco’s honor may be made to Baker Industries (www.bakerindustries.org) or the Settlement Music School (www.settlementmusic.org).

The family of Francesco Leto created this Life Tributes page to make it easy to share your memories.

Send flowers to the Leto family.