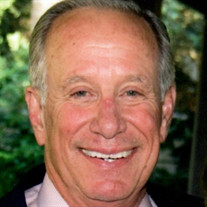 Frederick C. Haab of Villanova, PA and St. Michaels, MD, died peacefully at age 79 on April 2, 2017, in his home in Villanova, PA. He was born in Philadelphia on November 23, 1937. He was a graduate of The Episcopal Academy, class of 1955, and Cornell University, BA economics, class of 1959, where he was a member of the Sigma Phi Fraternity. He was honorably discharged from the US Army, 1st Lieutenant, 1959-1961, Battalion Adjutant, 35th Artillery, Fort Lewis, WA. His career was with the F. C. Haab Co., Inc., a fuel oil and lubricants distributor, headquartered in Philadelphia PA, where his last title was Chairman of the Board. He was active from 1961 – 2011 when he retired. The company was founded by his father, Fred C. Haab, in 1946. He worked with his two sons. Fred was actively involved with many organizations including former Chairman of the Board of Trustees of The Episcopal Academy, from 1992-1999, after joining the Board in 1975. He also served as President of the Alumni Society and as an emeritus trustee. He received the school’s Distinguished Service award in 1999. Fred was a former President of The Union League of Philadelphia from 2007 – 2008. He joined the League in 1961 and was a member for 56 years until his death. He was a former President of The PENJERDEL Council from 1986 – 1988. . Further, Fred was a former President of The Pennsylvania Petroleum Association, and a former Board member of the following organizations: Continental Bank, Midlantic Bank, and the Advisory Board of PNC Bank, Main Line Health Board of Governors, 2002 – 2011, and Maritrans Operating Partnership, Tampa, FL. He was a member of The Philadelphia Country Club for over 50 years, The Ausable Club in the Adirondacks, NY, St. Christopher’s Episcopal Church, Gladwyne, PA, and The Miles River Yacht Club, St. Michaels, MD. He had honor, courage, integrity and a fine sense of humor, as well as empathy for his fellow man. He was a leader who took an active role in every organization with which he was associated. He was a man of faith. He was a very well-known and well-respected member of the Philadelphia community. Fred was an athlete and was especially proud of his football playing days on Cornell’s 150 lb. team. He also played squash and tennis. He was an avid reader of history, especially interested in our country’s wars. But most of all, though, Fred was a family man who loved his family deeply. He loved spending time with them on his farm in St. Michael’s, MD, where he tended to his horses, chickens, bulls and goats. He owned many boats over his lifetime and, like most boat owners, he always had his eye on his next one. He loved deep sea fishing and spent every summer from his childhood until the early 1980’s in Ocean City, NJ. Later he fished the Chesapeake Bay from his base in St. Michaels, MD. Fred enjoyed travelling, which he often combined with his passion for the outdoors. He fly-fished in Alaska, Idaho and Montana. He hunted deer for many years in South and West Texas. He also took annual trips to the Gasparilla Inn in Boca Grande FL. He was the husband of the late Gabrielle (“Gaby”) Schwarz Haab from 1959 until she passed away in April, 2012. They met on a trolley on the way to school, became high school and college sweethearts, and were happily married for almost 53 years. He also found love late in life with his second wife, Judith S. Romig Haab, from 2015 until Judy passed away in December, 2016. He is survived by 3 children: F. Christian Haab Jr. (Ellin Paquette Haab), Meredith deH. Haab (Stephen P. Madjar), and Kurt A. Haab (Jean Plzak Haab MD), a sister, Joanna H. Schoff, and 7 grandchildren. Fred is survived by many beloved nieces and nephews. A memorial service in celebration of Fred's life will be held on Thurs. April 20th at 12 noon in St. Christopher's Episcopal Church, 226 Righter's Mill Road, Gladwyne, PA 19035. Burial will be private in the Churchyard. In lieu of flowers, contributions may be made in Fred's memory to The Episcopal Academy designated to the Reverend Jim and Vicki Squire Scholarship Fund. The Episcopal Academy c/o Jen Fifer. 1785 Bishop White Drive. Newtown Square, PA 19073. 484-424-1785.

Frederick C. Haab of Villanova, PA and St. Michaels, MD, died peacefully at age 79 on April 2, 2017, in his home in Villanova, PA. He was born in Philadelphia on November 23, 1937. He was a graduate of The Episcopal Academy, class of 1955,... View Obituary & Service Information

The family of Frederick C. Haab created this Life Tributes page to make it easy to share your memories.

Send flowers to the Haab family.