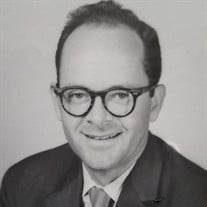 George Blyn, Ph.D., age 99, of Merion Station, Pa., passed away on January 29, 2019, at Lankenau Hospital. Born May 2, 1919, in Brooklyn, NY, he attended Erasmus Hall High School. After serving as a Sergeant in the U.S. Army, he attended the University of Pennsylvania where he earned his B.A. (1951) and M.A. (1953) in South Asia Regional Studies, and his Ph.D. (1961) in Economics. Dr. Blyn started his teaching career at Villanova University (Economic Geography, 1954-1962). He taught Economics at Rutgers University-Camden from 1962 to 1989, when he retired as Professor Emeritus. His major publication was a book, Agricultural Trends in India, 1891-1947: Output, Availability, and Productivity (U. of Pa. Press, 1966), which remains a classic in its field. He also published many journal and encyclopedia articles and participated in professional organizations (American Economics Association, Association American Geographers, Association Indian Economics Studies, Delaware Valley Geographers Association-Executive Committee, 1970-1989, and Economics of New Jersey--Vice President, 1986-89). Dr. Blyn was a Senior Faculty Research Fellow (American Institute Indian Studies, 1965-1966, 1979). In addition to his academic work, Dr. Blyn was a devoted thespian and opera buff, performing in shows ranging from Aida to The Fantasticks (Rutgers U.; Delaware Valley Lyric Opera Guild). At age 70, he took up competitive running, participating in many Broad Street Runs and Senior Olympics, continuing until age 94. Perhaps the biggest adventures of his life were two trips to India with his family. These included driving over 2500 miles (Pune to Shimla and back), combining his field research with side-trips for sightseeing. George Blyn, aka "Tiger" in his military years, was also known for his witty and insightful writing. He penned a regular column "Getting the Range" and wrote a theme song ("Moonlight Cavalry") for his Battery's "Searchlight Gremlins" to the tune of "The Caisson Song." He served in France, Germany, and England in WWII. George was the son of Philip and Rose (Faiby) Blyn and is survived by his loving wife, Dr. Charlotte Lilly Blyn, three devoted daughters, Stefany Blyn Jacobs, Roslyn Blyn-LaDrew, and Corliann Blyn, two grandsons, Timothy-Rae Blyn Jacobs and Steven-Alan Blyn Jacobs, a sister Eleanor Masser, and a niece, Kathy Blyn. Cheerful and active until his final illness, he will be very sorely missed. Viewing 11:30 am, Wed., Feb. 6, Chadwick & McKinney Funeral Home, Ardmore, Pa., followed by 1 pm burial at Westminster Cemetery.

George Blyn, Ph.D., age 99, of Merion Station, Pa., passed away on January 29, 2019, at Lankenau Hospital. Born May 2, 1919, in Brooklyn, NY, he attended Erasmus Hall High School. After serving as a Sergeant in the U.S. Army, he attended the... View Obituary & Service Information

The family of George Blyn Ph.D. created this Life Tributes page to make it easy to share your memories.

Send flowers to the Blyn family.