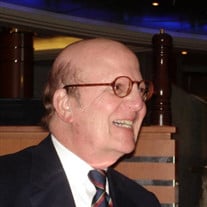 George A. D’Angelo, age 91, of Bryn Mawr, PA, died peacefully in his sleep on April 16, 2018 from heart failure. You may not have known him personally, but you might have noticed a very elegant man going to or from his Center City Philadelphia law office, lunch or civic, charitable or cultural meetings or events. He was often described as a true gentleman. You could tell the seasons by his attire. In summer, he wore his characteristic straw boater and summer three-piece suit. Like clockwork, on September 15 each year, he switched to his black bowler and darker three-piece pinstripe suit. On a lovely summer evening, you might have noticed him driving his 1949 Cadillac convertible, stopping by Two Street to enjoy an outdoor Mummers concert or swinging by Downey's for a bite. If you were truly lucky, you would catch up to him at the Four Seasons where he would buy you a drink. Born in Philadelphia on December 7, 1926 to Dominic and Lillian D’Angelo, he was graduated from Central High School in 1944. He received his Bachelor of Arts from the University of Pennsylvania in 1947 and his law degree from its Law School in 1950. He practiced law for many years at Truscott & Erisman, and then formed D’Angelo & Eurell. He was an Adjunct Professor at Temple University Law School (1954-1969), teaching both professional responsibility and the practice of law. His classes were always oversubscribed. His philanthropic interests lay in the arts and education in Philadelphia and New York. As President of the Philadelphia Art Alliance (1975-1981), he brought in many innovative shows and expanded its influence. He remained active as a member of its Board and even as Emeritus he regularly participated in meetings until his retirement. He also recognized the value of education and supported a number of scholarships. He was honored to have served as President of the Episcopal Church Club of Philadelphia, as Treasurer of the Lawyers Club of Philadelphia, on the Vestry of the Church of St. Asaph’s, and on the Boards of Promesa Foundation, New York, City Innovation, New York, and Hayes Manor Retirement Community, Philadelphia. He was a member of the Philadelphia Club, The Athenaeum, Merion Cricket Club, English-Speaking Union, Doubles (New York), Rittenhouse Club, Philobiblon Club, Franklin Inn, and American Philosophical Society. He loved to travel, speaking often of how it broadened one’s horizons and perspectives, and of the joy of meeting interesting people from different countries and cultures around the world. Part of his work took him to a number of countries in Africa, as part of efforts working with various African agencies to promote tourism and the expansion of investment in Africa. He enjoyed reading, particularly biographies and history, and the theater. He adored his grandchildren, always encouraging them to reach for their dreams and attending their games and performances. Occasionally he would even be spotted driving them to Episcopal Academy just to have some informal time with them. He was predeceased by his wife, Antonia Billett D’Angelo (1928-1986) who had a Masters in Psychiatric Social Work and was world-renown in the field for the prevention and treatment of alcoholism and drug abuse, with a particular focus on women’s issues. They met in English Class on her first day at the University of Pennsylvania. He is survived by his four children, Marc Scott D’Angelo, Christopher Scott D’Angelo (Betsy Hart Josephs D’Angelo), David Steven D’Angelo, and Victoria Scott Yeager; four grandchildren and his longtime companion, Brenda Barak. Burial will be private.

George A. D&#8217;Angelo, age 91, of Bryn Mawr, PA, died peacefully in his sleep on April 16, 2018 from heart failure. You may not have known him personally, but you might have noticed a very elegant man going to or from his Center City Philadelphia... View Obituary & Service Information

The family of George A. D'Angelo created this Life Tributes page to make it easy to share your memories.

Send flowers to the D'Angelo family.