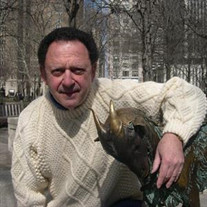 GEORGE ECONOMOU Noted American Poet, Literary Translator, Scholar and Educator, died on May 3, 2019, in Philadelphia, PA, at age 84. He is survived by his wife, Rochelle Owens, Poet, Playright. Memorial will be private. Memorial contributions may be made to Reading Is Fundamental, 750 First St., NE, Suite 920, Washington, DC 20002. George Economou was born on September 24, 1934, in Great Falls, Montana, the second child of Amelia (Ananiadis) Economou and Demetrios George Economou, a businessman and rancher, both of whom were immigrants from Greece. He was educated in the public schools of Great Falls, and graduated from its high school in 1952, after which he attended Colgate University, where he majored in English and graduated cum laude and was elected to Phi Beta Kappa in 1956. He earned an MA in English Literature at Columbia University in 1957 and a PhD in English and Comparative Literature in 1967, specializing in Old and Middle English and continental literature. He taught for 41 years, two of which were as an adjunct at Wagner College (1958-60), at the Brooklyn Center of Long Island University (1961-83) and at the University of Oklahoma (1983-2000), where he served as Chair of the Department of English (1983-1990) and Director of Creative Writing (1990-2000). He was appointed twice as Visiting Professor at Columbia as well as at Hunter College of CUNY. Upon his retirement in 2000, he was appointed Professor Emeritus of English at the University of Oklahoma. He married poet and playwright Rochelle Owens, June 17, 1962. They live in Philadelphia and Wellfleet, Massachusetts. During his graduate school years uptown New York at Columbia, he became actively involved in the burgeoning new poetry scene in downtown Greenwich Village and the East Village. He was a founding editor of The Chelsea Review (1957-60) and co-founding editor of Trobar and Trobar Books (1960-64) with Robert Kelly, and an active presence in many of the poetry reading venues of the time. Pursuing his lifetime interests as poet and scholar, Economou has published thirteen books of poetry and translations, the latest of which are Complete Plus, the Poetry of C. P. Cavafy in English, Ananios of Kleitor, and Acts of Love, Ancient Greek Poetry from Aphrodite’s Garden. Most significant of his many publications as a literary critic and scholar of medieval literature are The Goddess Natura in Medieval Literature, listed in a Century’s Retrospective of History of Ideas Books, his verse translation of the C-Version of William Langland’s Piers Plowman, and the editions of the late Paul Blackburn’s translations Proensa and the Poem of the Cid. Numerous works of his have appeared in anthologies, including translations of Euripides, ancient and Modern Greek poets, and others. Some of his own poems have been translated into Greek, Ukrainian, French and Spanish. An ACLS Fellow, a Rockefeller Fellow at Bellagio, and honored twice as an NEA Fellow in Poetry, he has lectured and given poetry readings at many universities and literary venues throughout the United States and abroad. The primary George Economou archive collection is held in the Rare Book & Manuscript Library in Butler Library of Columbia University. Smaller collections are held in the libraries of the University of Michigan, Ann Arbor, and Princeton University. *** “Ananios of Kleitor is…a kind of ancient-world equivalent of Nabakov’s Pale Fire…an affectionate and humane tribute to the power of poetry to lend new meanings to new readers’ lives across the ages. A wonderful book.” –TLS, The Times Literary Supplement “Economou’s translations alone establish him as an important literary presence.”—The American Book Review “Economou’s writing is an unfailing blend of wit, grace, and terseness, Olson/Bauhaus tempered with Pound’s haiku-like deftness and Mediterranean sweet new style.”--Parnassus

The family of George Economou created this Life Tributes page to make it easy to share your memories.

Send flowers to the Economou family.