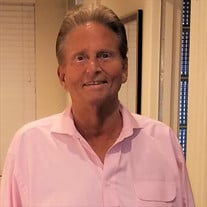 George Shaffer Wood III of St. Davids, Pennsylvania passed away peacefully on Saturday, April 28, 2018 in West Palm Beach, Florida at the age of 71. Born July 19, 1946 in Charlottesville, Virginia to the late Nancy Gray Lee Wood of Charlottesville, Virginia and George Shaffer Wood, Jr. of Kittery, Maine, George was raised and spent most of his youth in Charlottesville and Alexandria, Virginia. When he was a youngster, he lived with his family for several years in Kamakura, Japan where his father was stationed after WW2, attending the local grade school there from 1955 to 1959. Returning to Virginia, he attended Christchurch School, an Episcopal boarding school in Christchurch, Virginia, then went on to the University of South Carolina. After college, he moved to Aiken, South Carolina where he began work as a radio personality at a local radio station in Aiken, where his pleasant speaking voice and manner earned him the opportunity to broadcast live from the Masters Golf Tournament for several years. He moved to Philadelphia in 1979 and began work at Colonial Penn Life Insurance Company as a contract analyst, from which he retired. George is a direct descendant of Richard Henry Lee, whose “resolution for independency” of June 1776 led to the United States Declaration of Independence, which Lee signed. Richard Henry Lee and Francis Lightfoot Lee were the only brothers among the 56 singers of the Declaration of Independence. George was a member of the Society of the Cincinnati, the Mayflower Society, the St. Andrews Society (Scottish clan Dunbar), the Colonial Society, the General Society of Colonial Wars in both Pennsylvania and Florida, the General Society Sons of the Revolution and its Color Guard and the Society of the Lees of Virginia. George loved to travel and to collect art and antiques and had a life-long interest in music, having the opportunity to attend the first Beatles concert in the U.S. in Washington, DC in 1964. He had an aesthetic eye and a keen sense of style and was known for his warmth, humor and kindness. George was a gentleman in the truest sense of the word and will be sorely missed by his many friends and family. He is survived by his loving wife of 36 years, Barbara, his beloved sons James and Richard Wood, his cherished daughter Anne Marshall Wood Uskup, his sister Elizabeth Wood, 9 first cousins, 7 nieces and nephews, James’s wife Meaghan Wood, Anne Marshall’s husband Tom Uskup, and one grandchild, Alice Wood. Funeral services will be held at St. David’s Episcopal Church at 11:00 am on Monday, May 7, 2018 with burial in the Churchyard and a reception to follow. Contributions may be made in his name to St. David’s Episcopal Church, 763 South Valley Forge Rd., Wayne. PA 19087.

The family of George S. Wood III created this Life Tributes page to make it easy to share your memories.

Send flowers to the Wood family.