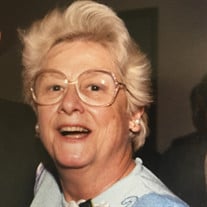 Georgia Miller Friel of Radnor, PA, died peacefully in the presence of family on March 11, 2022. She was 94. Georgia was born in Renovo, PA on May 27, 1927, and was raised in Depression-Era Western Pennsylvania. She was a graduate of Altoona High School and Penn State University, where she was a member of the Kappa Alpha Theta sorority. In search of adventure, she took a job with General Electric in Philadelphia, which changed the course of her life. On a trip to the beach in Strathmere, NJ, she met her beloved husband, Edward H. "Ted" Friel, Jr. They married in 1950, and together participated meaningfully in the events of their times. During the Korean War, Georgia gave birth to their first child on the U.S. Naval Base in San Diego. After Ted's service, they raised their family in the Philadelphia area, where for decades, Georgia served as Executive Vice President of Parkway Real Estate Company and as a Director of Haydon Bolts Inc., a supplier of heavy steel bolts that remains under family ownership today. Georgia authored her own remarkable second chapter after Ted's untimely death in 1984. She travelled the world with dear friends Mary Weaver and Sally Teaf, from Africa to Alaska and beyond. She was a committed volunteer to the Wayne Women's Exchange, the Bryn Mawr Hospital, and later, in the library at Dunwoody Village. She was a benefactor of the World Wildlife Fund, a longtime patron of the theatre and of the Philadelphia Museum of Art, and a member of the Merion Cricket Club. Georgia's happiest times were spent with her family on the Eastern Shore of the Chesapeake Bay in Maryland. She and Ted first brought their family there to sail in the 1950s. For the rest of her life, summer evenings by the waters of Rock Hall, MD, sharing laughs with family and friends in the twilight, brought her great joy. They just don’t make 'em like Georgia anymore. She possessed boundless fortitude. She was exceedingly social: she always seemed to have "plans" with some friend or other. She understood the importance of cocktail hour. She had a million sayings; she frequently broke into song. She had a stiff upper lip. And a great laugh. In addition to Ted, Georgia was predeceased by her parents, Clark M. and Helen Britt Miller, and her brother, Clark Jr. She is survived by all five of her children, Edward H. (Marla); Kathleen (Edwin) Crowell; Michael C. (Jennifer); Christine Friel (Ian Shipway); Andrew H., as well as six adoring grandchildren and two great-granddaughters. Georgia's family is grateful for the care she received at Dunwoody. Relatives and friends are invited to Georgia's memorial gathering on Friday March 25, at 2 P.M., at The Inn at Villanova University, 601 County Line Rd., Radnor, PA. Please email [email protected] if you plan to attend. Donations in Georgia's honor can be made to the Chesapeake Bay Foundation, www.cbf.org.

Georgia Miller Friel of Radnor, PA, died peacefully in the presence of family on March 11, 2022. She was 94. Georgia was born in Renovo, PA on May 27, 1927, and was raised in Depression-Era Western Pennsylvania. She was a graduate of Altoona... View Obituary & Service Information

The family of Georgia M. Friel created this Life Tributes page to make it easy to share your memories.

Send flowers to the Friel family.