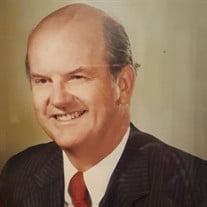 Graham Davenport Andrews, 88, of Newtown Square, Pennsylvania, passed away peacefully at Bryn Mawr Hospital on October 26, 2018. Graham, also known as Gray, was born in New Haven, Connecticut to Clarence F. (Andy) and Doris Davenport Andrews. He graduated from Brown University in Providence, Rhode Island, where he earned an AB in Economics. Graham was a Lieutenant in the U.S. Navy and served in Korea during the Korean War and was later stationed in Japan. For many years, Graham was a Financial Advisor for Merrill Lynch in Wayne and Philadelphia, PA. He loved following the markets and enjoyed training young advisors at Merrill. Graham was active in politics throughout his life. He served as Commissioner of the Fourth Ward of Radnor Township and was President of the Board for various terms. Graham was an active member of Wayne Presbyterian Church where he served as an elder, trustee and deacon at various times. He was also an active member and past president of the Saint Andrew's Society of Philadelphia. He was on the Boards of St. Christopher’s Hospital for Children, Delaware Country Medical Society Public Health Fund (President), Campaign Chair for Radnor Republican Party, Partners in Mission Campaign Presbytery of Philadelphia (Chair) and the Selection Committee of the Radnor High School Scholarship Fund. Among Graham’s passions were the water (he spent many summers at his grandparents’ house in Jamestown, RI and with his family in Madison, CT and Avalon, NJ), sports (proud Philadelphia Flyers season ticket holder since 1968) politics, the stock market, Scottish history and his grandchildren. He is survived by wife, Jean Fergusson Reed Andrews of Newtown Square, daughters Alyce Gesner Andrews of New York, Elizabeth Alcorn Andrews of Devon and Margaret Andrews Rosecky (John) of Phoenixville; grandchildren Andrew Rosecky, Sarah Rosecky, Katherine Rosecky, Joanna Santello and Emma Santello, brother Curtis D. Andrews (Jane), a niece and two nephews and many cousins. A memorial service will take place at Wayne Presbyterian Church at 3pm on Friday, November 9th with a reception to follow. Internment is private. In lieu of flowers, donations may be made to St. Christopher's Hospital for Children, Wayne Presbyterian Church or Wayne Senior Center.

The family of Graham Davenport Andrews created this Life Tributes page to make it easy to share your memories.

Send flowers to the Andrews family.