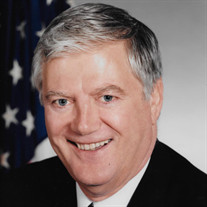 It is with a heavy heart that we announce the passing of Graham R Mitchell on Feb. 27, 2021, from complications related to the coronavirus. He is survived by his wife Patricia of Wallingford, PA, daughter Claire Mitchell Clark and her husband Tony, his son Iain Mitchell and his wife Adriana, grandson Julian Clark, granddaughter Sophia Clark, his sister Hilary Clark, niece Nancy, and nephews Paul, Stuart and Richard. His parents David and Doris Mitchell are deceased. Graham was a kind, generous, sensitive, and loving man, curious about many things in this world, eager to explore new ideas and meet new people. He was a lover of all the arts, music most among them, and enjoyed both Shakespeare and Benny Hill. He worked hard for his family and was a great provider. Born Graham Richard Mitchell in Oxford, England in 1938 to David and Doris Mitchell, Graham was raised in Oxford and west London, UK. He met Patricia at the Chandos Public House in Trafalgar Square, London, and they were married in 1963. Their daughter Claire and son Iain followed several years later. Graham received his PhD from London Polytechnic (Westminster University) in electrical engineering/plasma physics in 1967, then immigrated with Patricia, Claire and Iain to Philadelphia in 1968 for an employment opportunity at the General Electric Company. In addition to General Electric in Philadelphia and Schenectady, NY, Graham worked for GTE Sylvania in Waltham, MA, US Dept of Commerce in Washington, DC, the Wharton School at the University of Pennsylvania in Philadelphia, and finally Lehigh University in Bethlehem, PA. The highpoint in Graham’s career was his appointment as Assistant Secretary for Technology Policy at the Department of Commerce in the Clinton Administration. In many respects, Graham’s immigration to the US was an escape from the class and economic constraints of 1960s England. Like many, he found success in the United States. A child of wartime Britain, Graham rejected fascism, and maintained a deep irreverence towards nationalism under any flag. Similarly, he was dismissive of dogma where he sensed it. He loved his wife Patricia deeply, and created a strong relationship with his children, to whom he was father and friend. They spent many happy hours together messing around in boats, whether canoeing in the Pine Barons or sailing on Lake George. He loved the sportsmanship and camaraderie of rugby, which he played from the age of 14 until over 50, first in London and then throughout the East Coast of the US. He was a raconteur and loved interacting with all types of people, entertaining with tales of history or extended jokes. Graham made the world a better place. To his credit, and to our benefit, he brought peace, love, laughter, and understanding. In lieu of flowers, please consider making a contribution to The Settlement Music School (https://settlementmusic.org/give-now). A memorial service has been postponed until further notice.

It is with a heavy heart that we announce the passing of Graham R Mitchell on Feb. 27, 2021, from complications related to the coronavirus. He is survived by his wife Patricia of Wallingford, PA, daughter Claire Mitchell Clark and her husband... View Obituary & Service Information

The family of Graham R. Mitchell created this Life Tributes page to make it easy to share your memories.

It is with a heavy heart that we announce the passing of Graham...

Send flowers to the Mitchell family.