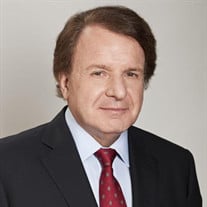 Harvey L. Nisenbaum, M.D., 77, UPenn radiologist Dr. Harvey L. Nisenbaum, 77, of Wynnewood, PA, Chairman Emeritus of the Department of Medical Imaging at Penn Presbyterian Medical Center (2001-18), died October 8, 2020 from complications of glioblastoma. Dr. Nisenbaum was born in Boston, MA and graduated from Boston Latin School, Tufts College of Engineering and Tufts Medical School. He completed a surgical internship at Mt. Sinai Hospital in NYC and a residency in diagnostic radiology at Montefiore Hospital and Medical Center in the Bronx. He was commissioned as a Lt. Commander in the U.S. Navy and served as the Director of Ultrasound at the former Naval Regional Medical Center in Philadelphia from 1974-76. Following his tenure in the Navy, Dr. Nisenbaum joined the faculty of Albert Einstein Medical Center (AEMC) in Philadelphia where he served in many capacities from 1976 through 1993 including Chairman of the Department of Radiology of the Philadelphia Geriatric Center; Head of the Ultrasound Section, Associate Chairman, and Acting Chairman of the Department of Radiology, AEMC; President of the Medical Staff of AEMC; and as a member, chair or officer of over 40 hospital committees. Dr. Nisenbaum joined the Department of Radiology at the University of Pennsylvania Perelman School of Medicine in 1993 and served as chairman of the Department of Medical Imaging at Penn Presbyterian Medical Center from 2001-18. During his 25 years at Penn, Dr. Nisenbaum actively served on 19 committees of the hospital including the Medical Executive Committee. He was a strong proponent of medical education and professional training and felt privileged to have a role in teaching countless radiology technicians, medical students, residents and fellows. Following a sabbatical year, during which he continued his passion to bring ultrasound to underserved countries around the world through his volunteer work with the World Federation for Ultrasound in Medicine and Biology, Dr. Nisenbaum retired from Penn’s Department of Radiology in 2019. Dr. Nisenbaum was the recipient of many awards and honors during his 44 years as a practicing board certified radiologist. He was elected as a Fellow of the College of Physicians of Philadelphia (1979), American College of Radiology (1990), American Institute of Ultrasound in Medicine (1998), and Society of Radiologists in Ultrasound (2002). Earlier this year he was recognized with the Peter H. Arger, M.D. Excellence in Medical Student Education Award from the AIUM, the Harvey Nisenbaum Award for Medical Imaging Research at PPMC from Penn’s Department of Radiology, and the Career Achievement Award from the PPMC Medical Executive Committee. From the beginning of his medical career, Dr. Nisenbaum strongly believed in the important role of professional societies in advancing the field of radiology through educational endeavors and advocacy. He was a member of 15 medical and professional societies and served on more than 140 committees and held many leadership positions over the span of his career including as president of the World Federation for Ultrasound in Medicine and Biology, the American Institute of Ultrasound in Medicine, the Pennsylvania Radiological Society, the Philadelphia Roentgen Ray Society and the Greater Delaware Valley Ultrasound Society. Dr. Nisenbaum was an active researcher who authored over 100 papers, abstracts, and book chapters, served as an investigator on 11 grants, and lectured at over 50 national and international meetings. He had particular interest in innovating ultrasound education and was instrumental in incorporating ultrasound into medical school curriculums. Dr. Nisenbaum also held editorial positions on six radiology journals. Dr. Nisenbaum traveled extensively, both professionally and personally, visiting more than 60 countries on six continents. During these travels, he enjoyed hiking and exploring new cultures through their art, architecture and food, and created a network of friends and colleagues around the world. Dr. Nisenbaum is survived by his beloved wife of 45 years, Sylvia (nee Tymowczak), and his son, Eric Nisenbaum, M.D. (Katie Guthrie), of whom he was immensely proud. He also leaves behind sisters-in-law Karen Nisenbaum and Doris Matthias, brothers-in-law Michael Tymowczak (Judy), George Tymowczak (Patricia), and Klaus Tymowczak, and eight nieces and nephews. He was predeceased by his brother Norman Nisenbaum, nephew Eliot Nisenbaum, brother-in-law Dieter Matthias and sister-in-law Suzanne Tymowczak. Due to the COVID-19 pandemic, a celebration of life will be scheduled for a later date. In lieu of flowers, contributions can be sent to the: Harvey L. Nisenbaum, M.D. Memorial Fund for Glioblastoma Research. Credit card donations can be made at http://www.pennmedicine.org/NisenbaumMemorial. For checks, please make payable to “Trustees of the University of Pennsylvania,” and mail to Penn Medicine Development, Attn: Sheryl Garton, 3535 Market St., Ste. 750, Philadelphia, PA 19104.

The family of Harvey L. Nisenbaum M.D. created this Life Tributes page to make it easy to share your memories.

Send flowers to the Nisenbaum family.