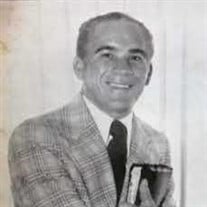 The Rev. Hector Raul Muñoz died on Monday, September 30, 2019. Born January 5, 1931 in Comerio, Puerto Rico, he moved to New York City in 1950 where he met and married Maria Mercedes Rivera on October 9, 1952 at Central Baptist Church on 92nd Street where they were faithful members, later becoming active and joining El Eden Assemblies of God, also in NYC. In 1965, they moved with their family to Lancaster, PA and joined the First Spanish Assemblies of God where he served as church musician, Sunday School teacher, and led several missionary trips to the Dominican Republic, Haiti, and Puerto Rico. From 1973 to 1995, Muñoz served as a missionary and church planter for the Assemblies of God and Eastern Mennonite Conference throughout Central America, Puerto Rico, California, and Florida. During that time he established two congregations in Guatemala, one in El Salvador, three in California, one in Puerto Rico, and two in Florida. He was a self-taught musician who played the accordion and organ, as well as composed, recorded and performed with the trio Voces de Jubilo. He was well known in Latino church circles for his album Carro de Israel and the Spanish hymn “Hay Una Senda.” His legacy of commitment and passion for the Gospel was passed on to his surviving children and grandchildren. Hector was predeceased by his wife, Maria, in 1995 and their daughter, Sarah Muñoz, in 1972. He is survived by 4 children, Dina Colón (Hector, Sr.) of Ocala, FL, Miriam Richardson (the late Charles) of Lancaster, PA, Rev. Lydia Muñoz (Rev. James McIntire) of Drexel Hill, PA, and Hector L. Muñoz, (Elizabeth Loy) of Kentucky. He was grandfather to 10 grandchildren, Lynette and Hector Colón, Jr, Dorian, Chevas and Evan Richardson, William Caraballo-Muñoz, Mercedes Maria Muñoz, Timothy, Lindsay, and Elizabeth McIntire in addition to 13 great-grandchildren Cassandra and Lucas Rodriguez, Gavin and Landon Colón, Liam, Felicity, and Jazzlyn Grace, August and Loretta Richardson, Emmanuel Richardson and Isabella Korb, Seumas and Evie McIntire. A Service of Death and Resurrection will be held at Ardmore United Methodist Church, 200 Argyle Rd, Ardmore, PA 19003 on Saturday, October 12, 11 AM; visitors may call at 10 AM. In lieu of flowers, donations may be made to “Eastern Pennsylvania Conference” Latino Ministries Fund designated as “Hector Muñoz Memorial” and mailed to PO Box 820, Valley Forge, PA 19482-0820 or on-line by visiting https://www.facebook.com/donate/525809574872888/?fundraiser_source=external_url

The family of Hector Raul Munoz created this Life Tributes page to make it easy to share your memories.

Send flowers to the Munoz family.