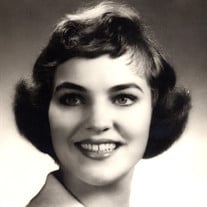 Heike B. McKay passed away on Sunday evening, January 12, 2020 at her home in Myerstown, Pennsylvania with her family gathered about her. Heike was born on June 2, 1938 in Kiel, Germany to the late Heinrich and Karla Dorothea (Möller) Brenker. She lived most of her adult life on Grayling Avenue in Narberth, Pennsylvania. Heike was sharing a more than sixty year courtship and marriage with her husband, William W. McKay. Heike and Bill lovingly raised three children, Heidi L. McKay, Susan D. Werner (Erik), and William W. McKay (Robin). They were also blessed with four grandchildren: Christopher W. McKay (Yoshika), William W. McKay, Daniel J. McKay, and Gwendolyn R. McKay. Their close Roberts and Adams relatives have been a source of joy and support. Heike was predeceased by an older brother, Horst Brenker, and is survived by sisters Traute Gottwald (Norbert) and Helga Fleisher, and another brother, Jürgen Brenker (Giesela) and their families. Heike was the office manager for more than thirty years at Bryn Mawr Orthopaedics, the practice of E. James Kohl, MD. She enjoyed collecting Arks, Lladro, Goebel, holiday items, scherenschnittenwerk, as well as crafting jewelry and sewing needlework. Heike often traveled to and with collector groups ATCA and TCA with Bill, but her greatest joy was her family, her friendships, and her relatives. While in Narberth, Heike held offices in the PTA, the Junior Women’s Club and was active in Girl Scouts, Cub Scouts, and Narberth Presbyterian Church. At her specific request, there is to be no ceremony at this time. Donations to the Thomas Jefferson Hospital for Neuroscience, 900 Walnut Street, Philadelphia, 19107 may be made in Heike’s memory.

Heike B. McKay passed away on Sunday evening, January 12, 2020 at her home in Myerstown, Pennsylvania with her family gathered about her. Heike was born on June 2, 1938 in Kiel, Germany to the late Heinrich and Karla Dorothea (Möller) Brenker.... View Obituary & Service Information

The family of Heike B. McKay created this Life Tributes page to make it easy to share your memories.

Send flowers to the McKay family.