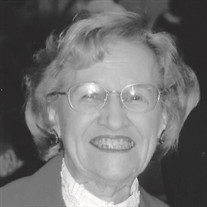 HELEN SMITH, March 31, 1927 – October 7, 2018 Helen Smith, 91, formerly of Wayne, PA, died Sunday, October 7, 2018 at Rosemont Presbyterian Village. Helen was born on March 31, 1927 in Saint Clair, PA, the daughter of Michael and Sophia (Kozar) Pushcarovich. One of nine children, Helen had fond memories of growing up in a large but close-knit family. Helen went to work in Washington D.C. where she caught the eye of her boss and future husband, Herbert M. Smith who was working as a hotel accountant. The two were married for 61 years before Herb died in June 2010. The first 22 years of their marriage were spent in Virginia where their three children were born. In 1971 Herb’s career advancement with the Audits Division of the U.S. Postal Service took them to Wayne, PA. Helen worked full time as an Office Manager/Secretary at Gulf States Paper Company in Devon until her retirement. Helen lived life to the fullest and was known for her energetic personality. She enjoyed singing in the choir at Saint Matthews United Methodist Church and the Cabrini Choir; cooking and feeding others until they were full; socializing at church and 59ers events; and spending time with family and friends. She is survived by her three children, Marsha Garrison (Mark) of Ardmore, PA; Ruth Bauer (Eric) of Ridgefield, WA; Charles Smith (Amy) of Mancos, CO; one brother, Andrew Baymor of Conyngham, PA; and one sister, Isabel West of Barnesville, PA. She is also survived by her five grandchildren: Andrew Garrison, Emily Garrison, Gwyn Garrison, Ethan Bauer, Jeremiah Bauer. A memorial service will be held at 11:30am on Saturday, October 27, 2018 at Saint Matthews United Methodist Church, 600 Walker Rd., Wayne, PA 19087. In lieu of flowers please give a child a cookie and buy yourself a new sweater – she would have wanted that. Her family would like to thank the caring staff at Rosemont Presbyterian Village, her residence for the past seven years. Tremendous thanks also goes to her amazing caregivers, Melanie Ferrara, Evelyn Woods and Holisticare Hospice for their dedicated love and service to Helen.

The family of Helen Smith created this Life Tributes page to make it easy to share your memories.

Send flowers to the Smith family.