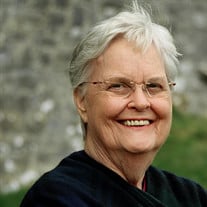 Helen Louise Whayne White, 86, died peacefully on January 11, 2018, in Philadelphia. Beloved by her family, Helen is survived by her children, George (and Lee), Gregory (and Patricia), and John (and Loran); and her four cherished grandchildren, Brian, Ellen, Emmett, and Sydney (aka, “The BEES”); and four generations of her dear Oklahoman nieces and nephews. Born in Ardmore, OK, on September 30, 1931, to John R. and Ethel Whayne, Helen - along with her older sister Lillian - were third-generation Oklahomans. Helen graduated in 1949 from Tulsa’s Central High School, and the University of Tulsa in 1953, where she completed a Bachelor of Arts in music performance. She moved to Philadelphia and attended graduate school in music pedagogy at Temple University. There she met her loving husband, George H. White, Jr., and they were married in 1956. George passed away in 2008. Helen was an accomplished concert violist. In addition to private violin and viola lessons, she also taught music and performance at Thomas Williams Junior High School in Cheltenham, and Chestnut Hill Academy in Philadelphia. Beginning in the ‘70s, Helen developed a new career as an educator in the Episcopal Church. In 1985, she became a member of the Bishop’s staff and the director of the Christian Education Resource Center at the headquarters of the Diocese of Pennsylvania in Center City. After retirement in 1997, Helen has continued as a renowned teacher of the Gospels, and also served as a sought-after parish consultant for adult Christian education. Helen was a long-time parishioner at St. Martin-in-the-Fields, in Chestnut Hill; a supporter of Christ Church & St. Michael’s in Germantown; and a member of The Society of the Companions of the Holy Cross. In November, 2017, at the Episcopal Diocese of Pennsylvania Convention, Helen received the distinguished Bishop’s Medal. In addition to her love for her husband and family, her friends, and music, Helen was an avid traveler and philanthropist, and a long-time loyal and forgiving Phillies’ fan. She enjoyed the community at Cathedral Village after moving there with George in 1998. Her enthusiasm and boundless joy was an inspiration to all who knew her. The family will host a viewing at Chadwick-McKinney Funeral Home, 30 E Athens Avenue, Ardmore, PA, on Thursday, January 18, from 6-8pm. A Celebration of the Resurrection will be held at The Church of St. Martin-in-the-Fields, 8000 St. Martin’s Lane, Philadelphia, PA, on Friday, January 19 at 1pm. Interment and Committal will follow at St. Thomas Church of Whitemarsh. A reception in Helen’s honor will be at Cathedral Village, 600 E. Cathedral Road, Philadelphia, PA, at 4pm. In lieu of flowers, donations may be made to either: Church of St. Martin-in-the-Fields (http://www.stmartinec.org); Episcopal Community Services (www.ecsphilly.org); or the Society of the Companions of the Holy Cross (www.companionsweb.org).

Helen Louise Whayne White, 86, died peacefully on January 11, 2018, in Philadelphia. Beloved by her family, Helen is survived by her children, George (and Lee), Gregory (and Patricia), and John (and Loran); and her four cherished grandchildren,... View Obituary & Service Information

The family of Helen W. White created this Life Tributes page to make it easy to share your memories.