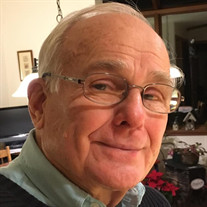 Henry (“Hank”) R. Adamczyk, 86, of Radnor, PA passed away on October 30, 2021. He was the beloved husband of his wife of 49 years, Johanna Carrozzino Adamczyk, brother to Raymond, and grandfather to Nathaniel, all of whom predeceased him. He is survived by his son, Henry (“Hank”) Jr. (Iris) and his grandchildren, Dylan and Mia. Hank is also survived by his wife’s sister Marian Schneider, nephew and nieces George (Pam), Sandra and Marian (George). He was the loving great-uncle to Jason (Allie), Eric, Katie, Alex, Ben and Sam, and great-great uncle to Nora. Hank was born in Philadelphia and received his B.A. in Economics in 1957, and a Master’s in Library Science in 1970, both from Villanova University. He was a proud alumnus of St. Joseph’s Preparatory School and served throughout his life as Class of 1953 President and then on its Alumni Board of Governors. In these roles he organized countless reunions and gatherings for fellow classmates. Hank was a devoted Catholic and served as a Eucharistic minister at St. Katharine of Siena Church in Wayne, PA. He had a long career in educational administration, during which he worked at Villanova University, St. Joseph’s University, and Unisys, among others, before retiring as the director of purchasing and special projects at the Radnor Township School District. A loving father and grandfather, Hank was very involved with his family. He and Johanna cherished time spent with their grandchildren and enjoyed supporting local artists. They also enjoyed many summer vacations first in Ocean City, NJ with the Carrozzino family and later in Avalon, NJ. Hank was an avid lifetime fan of Philadelphia sports. Funeral mass will be held at 11:30 a.m. on Friday November 5, 2021 at St. Katharine of Siena, 104 S. Aberdeen Avenue, Wayne, PA 19087. The family will receive guests from 10:15 to 11:15 in the Church. In lieu of flowers, donations may be made in his memory to St. Joseph’s Preparatory School, 1733 W Girard Avenue, Philadelphia, PA 19121. The Mass will be livestreamed at www.stkatharineofsiena.org

Henry (&#8220;Hank&#8221;) R. Adamczyk, 86, of Radnor, PA passed away on October 30, 2021. He was the beloved husband of his wife of 49 years, Johanna Carrozzino Adamczyk, brother to Raymond, and grandfather to Nathaniel, all of whom predeceased... View Obituary & Service Information

The family of Henry R. Adamczyk created this Life Tributes page to make it easy to share your memories.

Send flowers to the Adamczyk family.